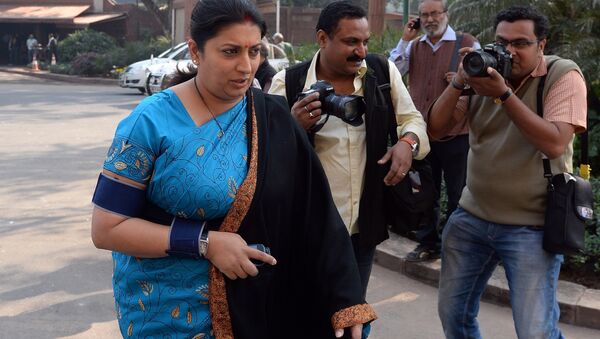 New Delhi (Sputnik): 30 June marked the first anniversary of India’s ban on instant divorces where Muslim men could divorce their wives by uttering “talaq” three times. Men attempting such divorces now face three years in jail as well as being liable for maintenance payments to their ex-wives.

Smriti Irani, a politician from the ruling Bharatiya Janata Party, attacked the opposition Congress party on Friday, saying it had the opportunity to pass instant divorce legislation during its tenure, and claiming that its priority was never the betterment of Muslim women.

Irani was addressing a media briefing marking the one year anniversary of the abolition of the controversial triple talaq or instant divorce practice.

The law had been in the legislative pipeline for years, however, was never passed while Congress was in office. The bill was tabled twice in 2018 and 2019 but remained pending in the upper house of parliament after it passed in the lower house.

On 1 August 2019, President Ram Nath Kovind gave his assent to the legislation, calling it “a milestone in the quest for gender justice".

The latest data of Union ministry of Minority Affairs shows only 1,039 incidents of triple talaq were reported in the country since the law was passed in 2019 compared with 382,964 cases between 1985 and 2019.

Union minister and senior party leader Prakash Javadekar on Thursday hailed the law and said it has led to female empowerment.

“One year ago on 30th July, 2019, Narendra Modi government abolished #TripleTalaq. It has contributed to women empowerment and given them the dignity they deserve in our society. Now, #TripleTalaq Cases have dropped by 82 percent since the law was enacted,” he said.