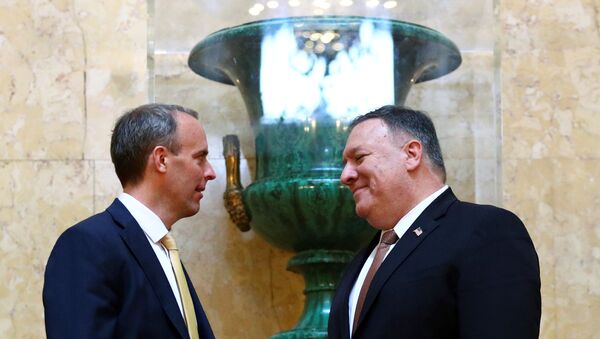 © REUTERS / HANNAH MCKAY
Subscribe
Established in the post-World War II period, the Five Eyes is an intelligence alliance comprised of the United Kingdom, the United States, Australia, Canada and New Zealand, united under a UK-USA agreement to cooperate in signals intelligence.

The United Kingdom is in "panicked" negotiations, seeking the restoration of the Five Eyes' body focusing on critical infrastructure such as communications and energy, known as the "Critical Five", after a five-year break, The Telegraph reported. The current report follows an earlier one by The Guardian that claimed that the Five Eyes could be expanded through the inclusion of Japan.

"Feverish discussion" on "Critical Five" restoration are allegedly taking place as the members of the alliance are concerned over what is described as "China’s artificial dominance of great swathes of the world economy" that "can’t be fixed without finally turning to our allies for help".

"Clearly, everyone is panicked. They haven’t met for five years, but fears over supplies and our ability to secure ourselves have grown so great that the governments are resurrecting this historic body in order to tackle security together," The Telegraph wrote, citing unnamed sources.

Alleged struggles to restore the "Critical Five" amid earlier reports by The Guardian that the possibility of Japan joining the alliance is being discussed as well, according to unnamed conservative MPs.

"We should look at partners we can trust to deepen our alliances. Japan is an important strategic partner for many reasons and we should be looking at every opportunity to cooperate more closely", Foreign Affairs Select Committee Chair Tom Tugendhat said, welcoming Japanese membership in the group.

Discussions reportedly included a new shared minerals security plan to prevent "dependence" on Chinese rare and semi-rare minerals necessary for the production of laptops, cameras and other tech supplies.

The restoration of the "Critical Five", if it occurred, could end a five-year-long hiatus, which is believed to stem from the members' failure to agree on what areas should be included in "critical infrastructure". The latter, when the group was established in 2012, was reportedly defined as "the systems, assets, facilities and networks that provide essential services and are necessary for the national security, economic security, prosperity, and health and safety of their respective nations".

The sectors that members agreed should be on the list reportedly included communications, energy, healthcare and public health, transportation systems and water.

The Five Eyes alliance envisages cooperation in signals intelligence, with the group seen by many as controversial. Edward Snowden, a former CIA agent, described the alliance as "super national intelligence organisation" that operates far beyond the laws of member countries.

000000
Popular comments
They are panicking because the tables are turning in favour of russia and china
SBNR
30 July 2020, 08:06 GMT11
000000
Please take out New Zealand.
Kiwi
30 July 2020, 08:26 GMT6
000000
Newsfeed
0
New firstOld first
loader
LIVE
Заголовок открываемого материала
Access to the chat has been blocked for violating the rules . You will be able to participate again through:∞. If you do not agree with the blocking, please use the feedback form
The discussion is closed. You can participate in the discussion within 24 hours after the publication of the article.
To participate in the discussion
log in or register
loader
Chats
Заголовок открываемого материала
Worldwide
InternationalEnglishEnglishMundoEspañolSpanish
Europe
DeutschlandDeutschGermanFranceFrançaisFrenchΕλλάδαΕλληνικάGreekItaliaItalianoItalianČeská republikaČeštinaCzechPolskaPolskiPolishСрбиjаСрпскиSerbianLatvijaLatviešuLatvianLietuvaLietuviųLithuanianMoldovaMoldoveneascăMoldavianБеларусьБеларускiBelarusian
Transcaucasia
ԱրմենիաՀայերենArmenianАҧсныАҧсышәалаAbkhazХуссар ИрыстонИронауОssetianსაქართველოქართულიGeorgianAzərbaycanАzərbaycancaAzerbaijani
Middle East
Sputnik عربيArabicArabicTürkiyeTürkçeTurkishSputnik ایرانPersianPersianSputnik افغانستانDariDari
Central Asia
ҚазақстанҚазақ тіліKazakhКыргызстанКыргызчаKyrgyzOʻzbekistonЎзбекчаUzbekТоҷикистонТоҷикӣTajik
East & Southeast Asia
Việt NamTiếng ViệtVietnamese日本日本語Japanese中国中文Chinese
South America
BrasilPortuguêsPortuguese
NewsfeedBreaking
01:00 GMTWho has the Edge Between Manchester United and Liverpool?
00:12 GMTBritish Military Brings Over 100 People Who Had Left Afghanistan to UK - Defense Ministry
YesterdayUS Seeking Clarity Over Turkey’s Intention to Declare US Ambassador Persona Non Grata
YesterdayUS Authorities Getting Veterans Involved in Resettlement on Afghan Refugees - Reports
YesterdayBiden’s Popularity Drops More Than That of Any Other US Leader Since End of WWII - Poll
Yesterday‘Rust’ Director ‘Gutted’ by Fatal Shooting of Halyna Hutchins on Set
YesterdayPotty-Mouthed PM: Broadcaster Blocks Boris Johnson's Remarks on Gay Men, Muslim Women
YesterdayHome Run! The Astros Win a Ticket to the World Series Amid Sign-Stealing Scandal
YesterdayColombian Authorities Reportedly Capture Elusive Drug Lord Otoniel, Leader of Clan del Golfo
YesterdayTwitter CEO Jack Dorsey Issues Cryptic Warning of ‘Hyperinflation’ Soon To Happen in the US
YesterdayOne Person Killed, 7 Injured in Shooting Near University Campus in US
YesterdayIran Set to Cooperate With Islamic World in Nuclear Development - Spokeperson
YesterdaySupermarkets in UK Reportedly Use Cardboard Cut-Outs to Disguise Empty Shelves
Yesterday5.0 Magnitude Earthquake Shakes La Palma as Spanish Island Territory Reels From Volcano Eruption
YesterdayJeremy Clarkson Slams 'F***ing Government' at Farming Awards Ceremony - Video
YesterdayPakistan Denies Reports of Preparing to Sign Airspace Agreement With US
YesterdayWatch Massive Migrant Caravan Push North Into Mexico as US Reports Record Apprehensions
YesterdayWatch Iranian Governor Getting Slapped on Stage During His Inauguration
YesterdayAssange's Extradition Incomprehensible After Revelations CIA Plotted to Kill Him, Fiancée Says
YesterdayUnderwater Treasure May Point to Location of Long-Gone 'Island of Gold' Empire