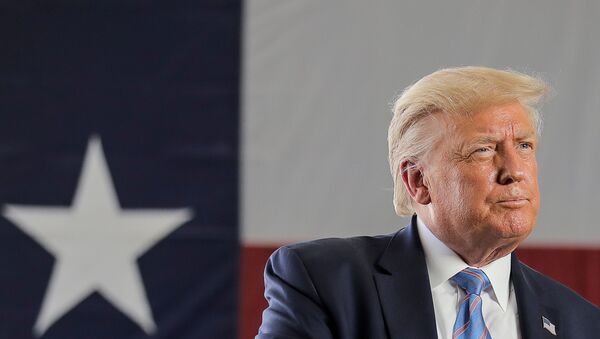 © REUTERS / Carlos Barria
Subscribe
Donald Trump has repeatedly suggested that the November election might be tainted by fraud if mail-in balloting is used widely as part of moves to adapt to the COVID-19 pandemic.

US President Donald Trump has suggested that the November presidential election should be delayed to prevent any fraud that might result from mail-in voting.

Trump tweeted on Thursday that mail-in ballots would lead to “the most inaccurate and fraudulent election” in US history.

“It will be a great embarrassment to the USA. Delay the election until people can properly, securely and safely vote,” he wrote.

Ellen Weintraub, a member of the Federal Election Commission and its former chair, tweeted in response that Trump has neither the power nor the money to delay the election.

No, Mr. President. No. You don't have the power to move the election. Nor should it be moved. States and localities are asking you and Congress for funds so they can properly run the safe and secure elections all Americans want. Why don't you work on that? https://t.co/mCLeS3yjbw

It comes as Trump’s strongest attack yet on the remote voting system, which is being increasingly employed across the US to accommodate the looming election to the coronavirus pandemic.

"These are challenging times for our people, facing organized and synchronized attacks on moral, political, religious, and social fronts.  This is nothing compared to the whirlwinds in our future.  Whether sufficient cause exists to continue the election because of Covid-19 is the question. Perhaps Dr. Anthony Fauci, Grand Master of the Plandemic, can explain that pitch and put the ball over the plate. They should have walked him out through right field", opines David E. Kenney, a US-based attorney and political commentator.

Meanwhile, Dr Harvey Schantz, a political science professor at the State University of Plattsburgh, explans that the setup and acceptable behaviors at the polls will be different than in the past due to the ongoing pandemic.

"There is no guaranteed protection from this scourge, but precautions will be taken such as face-masks, social distancing, and hand sanitizers. Voters should bring in their own pens to sign their names. Innovative ideas would be to have some of the polling places in semi-outside or outside settings where mild weather permits and to have plexiglass barriers between incoming voters and polling workers. Younger poll workers should be found to replace the senior citizens who disproportionately work the polls on Election Day", he continues.

Five more states – California, Montana, Nevada, New Jersey and Vermont – are set to join in this year, and around 17 states are going to send mail-in voting applications to every registered voter.

"It is very unlikely, an impossibility really, that the U.S. presidential election of 2020 would be delayed. The Election Day for federal elections, those for Congress and president, was set by law in 1845 as the Tuesday following the first Monday in November and it has remained so ever since, including during the U.S. Civil War in 1864 and during World War Two in 1944", says Dr Harvey Schantz.

Trump has repeatedly suggested that mail-in voting would invite fraud and allow Democrats to damage his re-election chances this year. He claimed last week, for instance, that foreign governments would counterfeit “millions” of mail-in ballots.

Attorney General William Barr, the president’s ally, floated the same theory last month. When pressed on his comments on Tuesday, he told a House Judiciary Committee he had no evidence that foreign countries could successfully rig US elections with forged ballots but insisted it was “common sense” that they would try to do so.

"A mid-July 2020 poll released jointly by The Washington Post and ABC News, or example, found that 38% of registered voters would “prefer” to vote by mail and 60% would prefer in-person voting. But Democrats preferred mail by 51 to 46 percent, while Republicans preferred in-person by 79 to 20%, and Independents preferred in-person by 54 to 42%. Looking more closely at the cross tabs, the highest preference for in-person voting was among Republican men with 82% and the highest preference for mail-in at 56% was among Liberals and the West, where it is long been used, almost exclusively, in Oregon, Washington, Colorado and parts of California. Given the demographics of the controversy over mail-in voting, it is understandable that President Trump would be concerned about the increased use of mail in voting for 2020", Dr Harvey Schantz explains.

Republicans also argue that if the ballots are automatically sent to every voter, including inactive ones and those with invalid registrations, this opens the door to rampant fraud.

Critics have accused the president of attacking remote voting to sow doubt about the fairness of the 2020 election and lay the groundwork for challenging the results if it goes against him.

According to CNN, the Trump administration is engaged in legal battles in at least 13 states, where the Democrats are seeking to expand mail-in voting rules.

His focus is on pushing back against ballot harvesting, which allows party officials and third organisations to collect signed and sealed ballots in some states, and also against the Democrats' efforts to eliminate ballot signature match requirements and to automatically send ballots to all eligible voters.

In May, for instance, the Republican Party sued the Democrat California governor, Gavin Newsom, over his executive order that stipulates sending all local voters mail-in ballots for the general election.

000000
Popular comments
Bingo! Yankee playbook when they cannot win, they postpone . . . like in Bolivia!