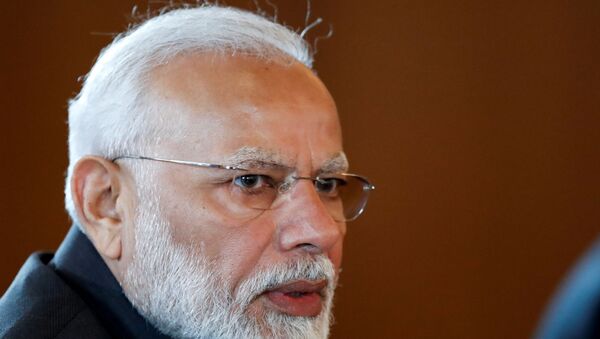 Ashutosh Kumar
Sputnik correspondent
All materialsWrite to the author
New Delhi (Sputnik): In 2014, India gave the Bharatiya Janata Party (BJP) alliance a thumping majority and bestowed the reins of the country on the party’s firebrand leader, three-time Gujarat state chief Narendra Modi – who promised good governance and economic growth. Modi and the BJP won an overall majority in 2019.

Modi, who took over the reins of the country as Prime Minister in 2014 for his first five-year term, had made it to power widespread allegations of policy paralysis in the Indian National Congress, which had been in power until then.

After regaining power in 2019, the Modi government initiated a slew of economic reforms, of which two quite significant ones were announced even in the midst of the fight against Covid-19 pandemic. These include:

Experts Sifting Through PM Modi's $266 Billion COVID Economic Stimulus Say Real Benefits Far Less
In May this year, the Modi government announced a relaxation in foreign direct investment (FDI) norms with respect to the defence sector. The government announced raising the FDI limit in defence manufacturing to 74 percent from the existing 49 percent. Apart from enhancing the FDI limit, the government is also focused on reforming the lengthy defence procurement process.

The erstwhile law requiring farmers to sell their produce only to licensees in the Agricultural Produce Marketing Committee (APMC) was done away with. The Modi government also announced that farmers will have adequate choices to sell produce at attractive prices with barrier free inter-state trade.

The department of financial service under the Indian Ministry of Finance announced the merger of 10 public sector banks into four, reducing the number of state-owned banks in India to 12. The merger is aimed at consolidating the banking sector and having a better management of loans, advances and risk.

Finance Minister Nirmala Sitharaman announced the long awaited corporate tax cut from 30 percent to 22 percent in September last year. The move was aimed at aligning the Indian corporate tax structure with global practices so that Indian companies do not lose out in global competitiveness. The tax cut was also aimed at giving a fillip to the slowing Indian economy.

Prime Minister Modi’s first government will go down in history for some of its reforms like the countrywide currency swap and the introduction of the Goods and Service Tax (GST).

On 8 November, 2016, Modi announced that INR 1000 and INR 500 currency notes will cease to be legal tender with immediate effect.

The success of the initiative is still under question. The government anticipated that at least $40 billion worth of demonetised currency would not re-enter the banking system. However, a report by country's apex bank the Reserve Bank of India suggests that 99.30 percent of the junked currency returned to the banking system.

As far as Goods and Service Tax (GST) is concerned, , it was the Congress party, which when in power prior to Modi's first term, first proposed the idea of having a GST to avoid double taxation in the indirect tax system. The Congress party, which ruled the country between 2004 and 2014 announced in 2006 that a system of GST would be put in place by 2010 – an announcement that remained on paper. However, it was Modi's BJP which spearheaded the GST and launched the new taxation system on 1 July 2017.

Be it GST or Demonetisation, none of the moves would have been possible for any government which had even the slightest doubt about its popularity and stability. In fact, sources in the Indian Ministry of Finance have revealed to Sputnik that Finance Minister Nirmala Sitharaman is taking feedback on the economy from various sectors and more stimulus and reforms may be announced in the days to come.