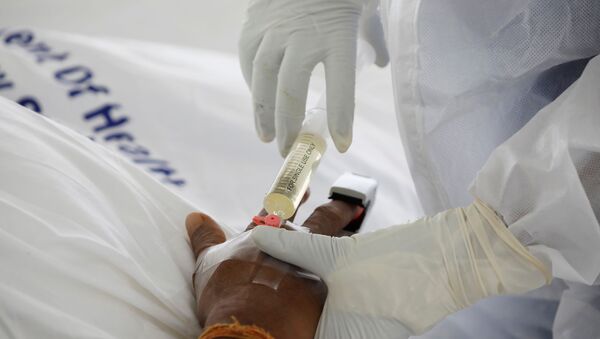 © REUTERS / BAZ RATNER
Subscribe
Victoria Teets
All materialsWrite to the author
The European Union is warning its member states that there is a looming risk of a shortage of critical equipment that would be needed to administer mass COVID-19 vaccinations. EU Warns Critical Supply Shortages May Hinder Future COVID-19 Immunization Campaigns

In a recent document, the EU states that such equipment, specifically syringes, wipes and protective gear, will likely be hard to come by in the future and urges members of the bloc to consider a joint procurement of such items, reported Reuters.

Although no vaccine against COVID-19 has been fully developed or approved yet, countries across the globe are attempting to secure supplies of potential shots so that if and when vaccine candidates are shown to be effective, immunization campaigns can begin without delay.

Should a vaccine candidate be proven effective, manufacturing and distribution issues could become major challenges, which many countries aim to avoid. Some governments hope a vaccine could be ready as early as this year.

The EU has also asked member states to consider jointly buying more doses of influenza vaccine and increasing the number of people who receive it, which would reduce the risk of simultaneous flu and COVID-19 outbreaks in autumn, reported Reuters.

“COVID-19 vaccines, once developed, may come without syringes and other items,” the EU Commission, the bloc’s executive arm, told European health experts during a meeting last week, according to a summary report on its website.

“There could be shortages,” it warned, asking member governments about their supplies of syringes, wipes, alcohol and personal protective equipment such as face masks.

The document urges EU members to consider a joint acquisition of such items, which could help them obtain better prices through cooperation rather than competing against one another. Representatives of Italy and the Netherlands expressed interest in such a plan, Reuters reports.

The EU Commission also noted at the meeting that it had asked vaccine manufacturers about whether additional doses of influenza vaccine were available, according to the document. Member states were invited to communicate their interest by July 24 on a possible joint purchase of such vaccines.

The Commission declined to comment on either the supply acquisition proposal or the flu vaccine proposal, with a spokesman noting in regards to the former topic that preparations for such possible purchases are confidential, according to Reuters.

000000
Popular comments
Try manufacturing the equipment needed instead of weapons of death and destruction, da.