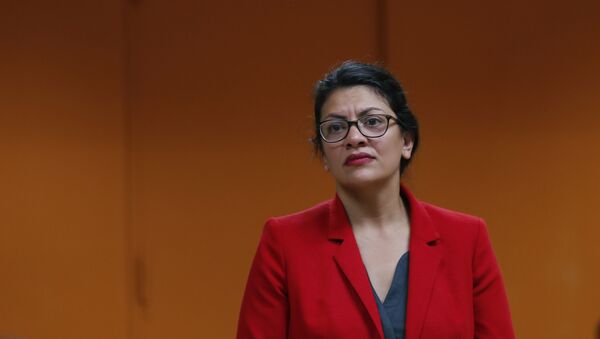 © Paul Sancya
Subscribe
As the clock runs down to the November 2020 presidential election, supporters of the progressive wing of the Democratic Party are having to reconcile their differences with presumptive nominee Joe Biden.

The Michigan congresswoman Rashida Tlaib said this week that she will not give support to presumptive Democratic nominee Joe Biden.

While speaking to Newsweek magazine, the 'Squad' member said that she would instead be focusing on her own reelection rather than endorsing the former vice president.

“He hasn’t directly called me or anything, but no", she said. “Right now I’m focused on my election, my constituents and my residents".

The left-wing congresswoman, who supported Bernie Sanders for president before he dropped out of the race, said that she doesn’t want to enter into debates with people over whether Biden deserves their vote.

"Residents come up to me and say, ‘Rashida, I don’t know. I hear Joe Biden this, Joe Biden that’,” she explained. “If the ultimate goal is to get rid of Donald Trump, that doesn’t have to involve me actually endorsing Biden".

She said that she does not have to convince her constituency of the former VP's candidacy.

Tlaib is also facing a primary of her own in Michigan’s 13th Congressional District. As she seeks election to a second term, Tlaib will be facing Detroit City Council President Brenda Jones next week.

Jones is running on the platform that Tlaib has allegedly ignored the district and become too enveloped in national issues and has questioned her professionalism.

“You can be vocal, but the things that were being done — like calling the president a ‘MF’ or booing Hillary — every time something like that happened, I was getting calls from people saying ‘You’re more professional than this’”, Jones said to The New York Times

Tlaib hit back against the accusations, claiming that they were cherry-picking a few publicized incidents while overlooking her policy achievements locally

As part of 'The Squad' of 4 progressive congresswomen - alongside New York's Alexandria Ocasio-Cortez of New York, Ilhan Omar of Minnesota, Ayanna Pressley of Massachusetts - she is known for her overt opposition to the centrist wing of the Democratic Party.

​The incumbent congresswoman holds the seat of John Conyers Jr - a cofounder of the congressional black caucus - who died in 2019. After he stepped down over sexual harassment claims by female members of staff, Jones briefly held the seat.