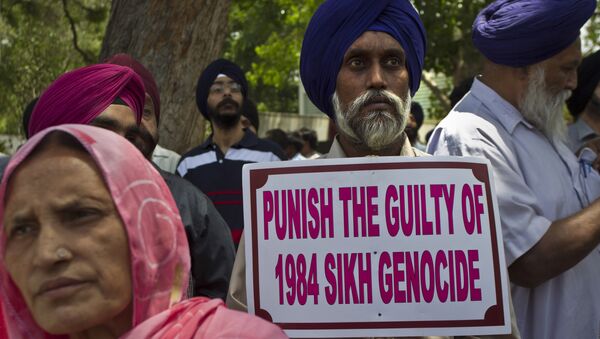 New Delhi (Sputnik): Sikhs for Justice (SFJ), a US-based group seeking a separate homeland “Khalistan” for Sikhs in India’s Punjab state, is banned by the Indian government as a separatist group on the basis of its secessionism and alleged anti-national activities.

The British government has rejected a request from the NGO Sikhs for Justice to endorse Referendum 2020 (SFJ), a proposal to have Punjab residents vote on whether to separate from India and establish the nation of "Khalistan".

The UK government has also stated that it considers the state of Punjab to be an integral part of India (not to be confused with the adjacent Pakistani province of Punjab).

A spokesperson of the British High Commission, while responding to a question on the SFJ referendum, stated that it is a matter for the government and people of India, not foreign countries or overseas organisations.

“The UK government is not involved in any way with this unofficial and non-binding referendum. We consider Punjab to be a part of India,” the spokesperson said.

The statement from the UK government has come days after Canada, despite its large Sikh diaspora, refused to lend support to the idea of Khalistani separatism. The Foreign Ministry of Canada had stated that the bilateral relationship between India and Canada remains a priority for Ottawa.

“We respect the sovereignty, unity and territorial integrity of India ... the Government of Canada will not recognise the referendum,” Canada’s Foreign ministry had said.

India welcomed the remarks from the ministry; Indian envoy to Canada Ajay Bisaria said, "Canada continues to show sensitivity to Indian security concerns. Canada is a strategic partner for India and we will continue to engage closely with Canadian interlocutors, including security agencies, on a range of bilateral security issues."

Meanwhile, SFJ, a banned pro-Khalistan group, plans to hold voter registration camps for its secessionist agenda 'Referendum 2020' on 15 August (India’s Independence Day) in front of Indian embassies in seven countries, including the US, UK, France, and Canada.

Embassies in these countries have been asked to be on alert by the Indian security agencies.

Canada has the largest number of Sikhs outside India, accounting for 1.4 percent of the nation's population, followed by United Kingdom, where around 0.7% of the population is Sikh.