Will GOP Distance Itself From Trump to Save Congressional Seats as President's Poll Numbers Slide? 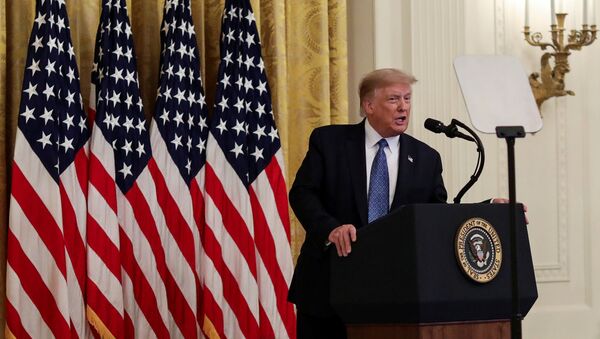 As the November election day nears speculations are swirling about Donald Trump's plummeting poll numbers which threaten to ruin the Republican Party's bid to keep control of the US Congress. Political scientists have discussed whether the GOP is really breaking ranks with the president and who might be Trump's most likely successor in the party.

NBC News insists that the president is destroying the GOP, while USA Today warns that the Republican majority in the Senate is at serious risk due to Trump's "racial rhetoric", mishandling of the pandemic, and a related economic crisis. On the top of this, Americans' party preferences have shifted dramatically in the Democratic Party's direction since January, according to Gallup. All of the above have prompted the question, voiced by The Guardian's Washington DC bureau chief in early July, about whether the GOP will "ditch" the incumbent president to save their congressional seats.

'Dissent is Growing Among GOP Politicians'

"The key to understanding this is to recognise that Trump is not a party politician", says Dr Mark Shanahan, associate professor and head of the Department for Politics and IR at the University of Reading, the UK. "From 2016 to early 2020, the Republican Party was happy to hitch its wagon to his horse since he was, as he would put it, ‘winning’".

While the economy was growing, the wider GOP tolerated Trump's populism, isolationism, and unorthodox foreign policy approach, according to the professor, who outlines two things which have changed:

·         the president's misreading of the country's "passionate cry for social change" amid the George Floyd protests.

When it comes to conservative values, Trump "has no fixed underpinning values or objective stances on policy" being "the thrice-married former New York Democrat", argues Shanahan.

Though the GOP currently remains united on the surface, there's growing dissent within its ranks and "individual Republican politicians are now starting to do what they can to put distance between themselves and the president in the hope they can win their own election races in November", the academic alleges.

Likewise, The Hill has recently warned that the dissent among Republicans will grow unless Trump "arrest[s] his slide in the polls". In early July, a group of around 200 former George W. Bush administration and campaign officials even launched a super PAC called "43 Alumni for Biden" in a bid to galvanise never-Trump Republicans and GOP voters disenchanted with the president's domestic and foreign strategy.

It is "almost certainly too late to ‘ditch Trump’ for this election", Shanahan presumes. However, even if Trump does win in November, "he may well face a sea of Blue with both the House and Senate electing Democrat majorities".

'Trump is Not Going Anywhere, GOP Voters are Solidly Behind Him'

Gary Nordlinger, a professor at the Graduate School of Political Management at George Washington University, holds an opposite view: "The fact is Donald Trump has 90% approval ratings among people who identify as Republican", the academic says. "He is not going anywhere before the election unless his health fails or something really shocking comes out".

Indeed, Gallup's July poll admitted that 91% of GOP voters approve of the job Donald Trump is doing as president. For comparison's sake, the Republican approval for George W. Bush in the first half of 2008 stood at only 69%.

"People who identify as Republicans are solidly behind Donald Trump and he is in control of the party apparatus", the professor emphasises. "Trump voters are very enthusiastic about voting for him while two thirds of Biden's supporters support him because he is not Donald Trump. That is a huge enthusiasm gap. Trump's strategy will be trying to convince people that Biden is a socialist, senile buffoon".

Though Trump is a New Yorker and was a Democrat from 2001 to 2009, the social issues he advocates – like anti-abortion and gun rights – and judicial appointments he has made are clearly conservative, according to Nordlinger.

However, "when it comes to budget deficits, he does not fit the traditional conservative mold. For the internationalist wing of the Republican Party, Trump is too much of an isolationist", the academic remarks.

Regardless of Trump's victory or defeat in November, the Republican Party will never be the same, deems Mark Shanahan.

According to him, the party has further swung to the right under Trump which could make it "nationally unelectable" in the future.

"The post-Trump GOP will need to find a way to engage with America over the economy, over social issues, and over retaking its place in international affairs", Shanahan opines. "That won’t be easy".

The GOP's image has undergone changes during the Trump presidency, acknowledges Nordlinger: "It has cemented the hold on working class whites who used to prefer Democrats on economic issues", he notes. "However, it has cost them suburban college educated people who traditionally preferred Republicans".

One might wonder as to who will be Trump’s successor in the party. According to Nordlinger, Mike Pence, Nikki Haley, and Mitt Romney are the most probable candidates. However, it remains unclear whether Romney "burned his bridges with the Trump wing of the party" and "if he can bring the suburban voters back into the party to offset them", the professor remarks.

"We tend to prefer presidential candidates that are former governors or vice presidents", the academic explains. "Our current Vice President Mike Pence is both. Nicki Haley is a former governor and United Nations Ambassador and Mitt Romney would love to run again".

For his part, Shannon insists that Pence, Haley and yet another possible GOP candidate, Mike Pompeo, "may be burned by their association with Trump".

"It may be time for someone new to step up: look for new-breed Republicans, forged on the right rather than having navigated to it. Someone like Senator Josh Hawley from Missouri might garner the Republican mantle next time round", the British academic predicts.