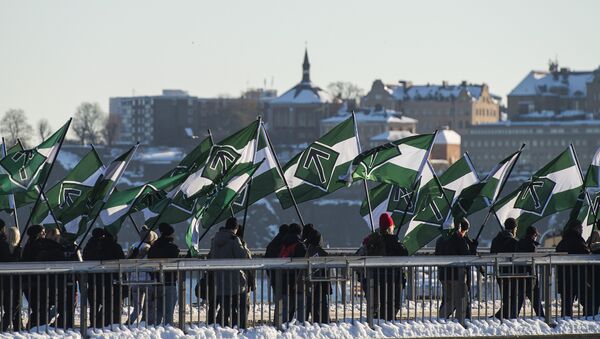 The National Socialist Nordic Resistance Movement, which relies heavily on traditional Nordic and Viking imagery such as runes to convey its message, has sparked the ire of the Swedish Academy for what it sees as misrepresenting classical Swedish poets of the national romatic era.

In a bitter dispute, the Swedish Academy is seeking to prevent the National Socialist Nordic Resistance Movement (NMR) and its online magazine Nordfront from quoting classical Swedish literature.

The academy believes that Nordfront, through its publications, more or less explicitly, claim that the authors' political and national message would be the same as what the NMR and Nordfront stand for, national broadcaster SVT reported.

This, according to the academy, constitutes a distortion of their literary works which is prohibited by Section 51 of the Copyright Act. According to it, certains works whose copyright has expired should be protected against being reproduced “in a way that violates the interests of spiritual cultivation”. To achieve its goal, the academy sued for violations of the so-called protection of the classics clause in the Copyright Act.

The NMR and Nordfront stressed in their reply to the court that the protection of the classics clause is meant to prevent classic works from distortion, such as in poorly abridged versions for profit by rogue publishers, and doesn't prevent correctly reproduced quotes, regardless of who published them and where.

According to the court, the Swedish Academy has time to submit a new opinion no later than 28 August.

The Nordic Resistance Movement is a Pan-Nordic National-Socialist movement and in Sweden even a political party. It is established in Sweden, Norway, Finland, and Denmark, with offshoots in Iceland. It has been banned in Finland, but the ban has been appealed.

The NMR is known for its opposition to non-white immigration to Sweden and seeks to establish a single Nordic National-Socialist ethnostate under a direct democratic government through revolution or elections. It is known to have expressed anti-Semitic sentiments and has praised the Palestinian organisation Hamas.

The Swedish Security Police (Säpo) have named the NMR as one of the biggest threats to Sweden's internal security. The organisation is considered to be key player in what is seen as the white power environment, and is considered to be hierarchical with a military appearance and disciplinary action for failing to follow the group's internal rules.