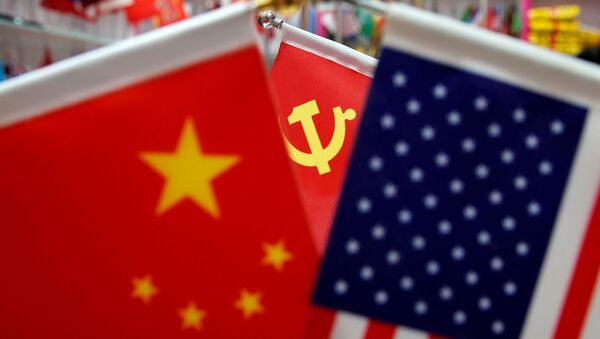 The Five Eyes intelligence alliance is looking to expand into Japan and broaden itself into a strategic economic relationship, that pools key strategic reserves, whilst working internationally to decouple the west from China.

Sputnik: What does this expansion of the controversial Five Eyes intelligence service represent; are these accusations against Beijing just another case of Sinophobia?

Tom Harper: Well, the most obvious phenomena it represents is the greater tensions between the US and China, which has escalated in recent years, and a part of this has been a wider pressure campaign waged by the US on its allies to get them to fall into line on China. In this country the most notable example has been the pressure on the government to ban Huawei, which has led to the recent proposal to remove all Huawei gear from our 5G networks by 2027 and with the economic side it's generally a lot of relationships, such as Five Eyes - primarily security relationships and this was one of the notable features of the earlier Pivot to Asia, which was pursued by the Obama administration back in 2011.

The biggest criticism of that was that it was primarily a security relationship and it had very little of the economic dimension. The economic dimension here is largely in relation to rare earths, which are crucial elements to US defence companies such as Lockheed Martin and China possesses about 80% of known reserves of rare earth minerals. Regarding the allegations of Sinophobia, there's definitely an element of it - particularly in the US - where it's become a very big staple of Trump's campaign. It's also a really a continuation of policies prior to Trump.

Sputnik: What effect will it have on already strained relations between China and the West?

Tom Harper: In some ways it's going to be worse before it gets better but again, we have to look at how China will respond as well, because it'll likely be in terms of economic measures. In fact, by returning to rare earths previously, the rare earths were considered the nuclear option for China. So what might happen is we'll see China being more willing to implement more stronger measures against what it seems to be slights.

World
Five Eyes Members Seek Alliance’s Expansion Amid Economic Competition With China: Report
Equally, at the same time, China's also will respond with its own initiatives, the most famous being 'The Belt and the Road' and any expansion of things such as the Five Eyes will have similar Chinese response. They'll have stronger ties with states such as Russia and also a lot of this has enabled them to have a far stronger influence in international bodies such as the UN.

At the same time with the security and economic dimensions, they'll have to be a question over which comes first, and because of many Chinese being one of the few major economies to still be somewhat resilient. Any recovery effort, China will be a very central part of, and many of these member states have had problems with COVID. That is going to be the core issue that underlines the future of this, whether they want to improve their economy or whether they want to pursue a stronger security ties.

Sputnik: With things in Europe looming like Brexit, which is obviously going to impact the UK greatly… could this Five Eyes Alliance cause problems when it comes to the UK trying to ratify some of these trade deals going forwards?

Tom Harper: Yes, I think Brexit will certainly be a factor in there. So, in some ways, as I said the other sides of the economic and security dimensions, many of the moves against China will be quite potentially harmful for the UK economy, especially if Britain does sour its relationships with Europe and of course there's the fallout from COVID, which will make this worse. Again, there'll be quite a bit of controversy over whether this will go through or not and then there's the issue of whether Britain is truly a part of Europe or if it's part of this notion of the Anglosphere.