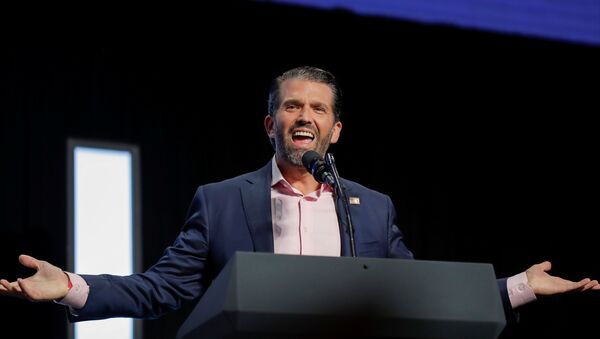 © REUTERS / Carlos Barria
Subscribe
Back in May, Twitter announced that it would put labels and warnings on posts with disputed or misleading information about the coronavirus. The move is part of a larger strategy that the company has adopted to deal with misinformation on its platform, and it extends to other issues.

The post in question featured a video in which a group of doctors said that introducing nationwide lockdowns and wearing masks are not needed to stop the spread of coronavirus. The video also promoted the anti-malarial drug hydroxychloroquine, which the World Health Organisation has said is ineffective against COVID-19.

"Tweets with the video are in violation of our COVID-19 misinformation policy. We are taking action in line with our policy", a Twitter spokesperson said, commenting on the company’s decision to suspend Donald Trump Jr.

The news of the suspension was first reported by Trump Jr.’s ally, Republican strategist Andrew Surabian, who said that Twitter’s decision showed that the social media giant poses a "threat to free expression" and accused the platform of election interference.

Big Tech is the biggest threat to free expression in America today & they're continuing to engage in open election interference - full stop. pic.twitter.com/7dJbauq43O

​The president himself has posted the same video as his son, but the tweet has been replaced with a message saying that it is no longer available. It also seems that POTUS’ access to his account has not been restricted, as he continues to tweet.

Donald Trump has a complicated relationship with the American big tech companies Google, Facebook, and Twitter, which he has accused of bias against conservatives and of censoring their voices. In 2019, during a White House meeting, Trump even threatened the companies with tough actions.

In May, Trump threatened to "strongly regulate" or even close down social media platforms that fail to maintain an ideological balance after Twitter put a warning on one of his tweets. In the post, Trump criticised the riots in Minneapolis, during which demonstrators looted shops, defaced buildings, and burned them. The protests started after the death of an African-American man, who died at the hands of a white police officer.

Trump called the demonstrators thugs and warned that “when the looting starts, the shooting starts”. Twitter hid the tweet and placed the following message over it. "This Tweet violated the Twitter Rules about glorifying violence. However, Twitter has determined that it may be in the public’s interest for the Tweet to remain accessible". After clicking on the tweet, it became available.