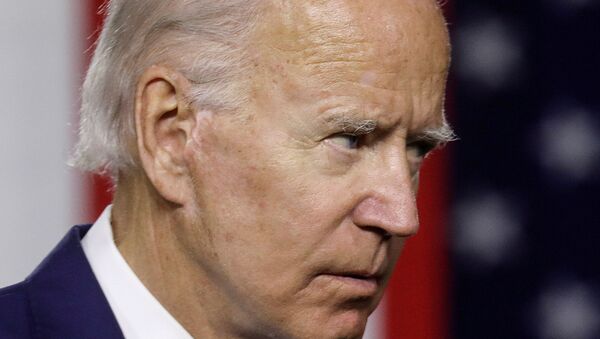 In the upcoming November US presidential elections, incumbent President Donald Trump will face Democratic presumptive nominee Joe Biden, who, according to some recent polls, is leading by seven points in the key swing state of North Carolina.

Former Bernie Sanders' campaign co-chair Nina Turner expressed her lack of excitement about the upcoming US presidential elections, offering a less-than-pleasant analogy of having to vote for either the Democratic or Republican candidate.

Slamming both Donald Trump and Joe Biden, Turner harshly suggested that fellow Democrat Biden was a lesser evil compared to the Republican president.

“It’s like saying to somebody, ‘You have a bowl of sh** in front of you, and all you’ve got to do is eat half of it instead of the whole thing.’ It’s still sh**", she said, cited by The Atlantic in an article pondering on reasons why Trump could be re-elected in November.

The piece had another, albeit less harsh but similarly critical opinion on Biden, expressed by Harvard University Professor Cornel West.

"We have to be true to ourselves and acknowledge that Biden is a mediocre, milquetoast, neoliberal centrist that we’ve been fighting against in the Democratic establishment," West observed.

Despite new polls showing Biden leading by 7 points in the key swing state North Carolina and recent Fox News polls implying that the Dem is ahead of the incumbent president by nine points in several other states, many argue that polling numbers might fail to reflect - as they did back in 2016, that, despite losing the popular vote, Trump won against former Democratic candidate Hillary Clinton and became president after securing enough electoral college votes.

The Atlantic's article "Don't Count Trump Out" offered several reasons for Trump being able to remain in the Oval Office, particularly including the possibility of the economy recovering after the COVID-19 pandemic, Trump's constant campaigning (even outside his campaign rallies) and even a purported inability of Biden supporters to vote because the pandemic forces them to stay home, helped along by Trump's opposition to mail-in ballots.