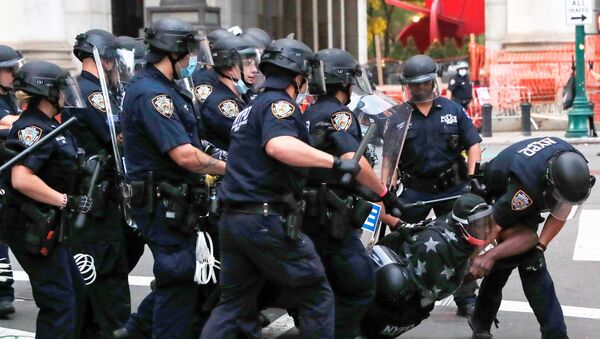 For the first time, disciplinary records of thousands of New York City Police Department officers have been publicized, revealing that some 4,000 active-duty cops in the 36,000-member force have had at least one substantiated complaint leveled against them. While this alone is shocking, it also raises questions about what authorities are hiding.

Writer and activist Anoa Changa joined Radio Sputnik’s Political Misfits on Monday and explained to hosts Bob Schlehuber and Michelle Witte that the New York Police Department's (NYPD) complaint database published by ProPublica shows that there is a lot of information missing from the national conversation on defunding the police.

“According to the records, 303 officers still working at the NYPD have had five or more substantiated allegations against them,” the nonprofit outlet revealed on Sunday.

“We do know that there are far more complaints that have been made that have not been ‘substantiated,’” Changa asserted.

“We also know that just even in the cases that make it to the mainstream news, that there are often instances where what is reported as, and accepted as, the official story always ends up coming out … to be something completely different once the dashcam is released, once the bodycam is released.”

She pointed out that one instance of this occurred with the Chicago Police Department following Officer Jason Van Dyke’s 2014 murder of Laquan McDonald.

Van Dyke, who shot McDonald 16 times on October 20, 2014, became the first Chicago cop to be convicted of murder for an on-duty shooting in about 50 years when he was sentenced to nearly seven years behind bars in January 2019.

Though Van Dyke was eventually sentenced, the yearslong case exposed a toxic cover-up culture within the Chicago Police Department and resulted in the Chicago Police Board voting on July 18, 2019, to discharge Sgt. Stephen Franko and officers Janet Mondragon, Daphne Sebastian and Ricardo Viramontes.

The board found that Franko "failed to properly supervise his officers" on the night of McDonald’s murder and reviewed and approved “critical case reports” containing "several demonstrable and known falsehoods.”

As for the other cops, who were all present at the scene, the board wrote that “each of the three officers failed in their duty - either by outright lying or by shading the truth.”

Furthermore, 86 minutes of surveillance footage obtained from a Burger King near the 2014 crime scene were deleted by Chicago cops, who demanded to see the footage minutes after McDonald was murdered, according to a grand jury testimony by Burger King district manager Jay Darshane.

"I was just trying to help the police with their investigation," Darshane said. "I didn't know they were going to delete it."

Despite a 2016 analysis from the FBI finding “absolutely no evidence of tampering,” skepticism has persisted concerning the missing 86 minutes of video.

Changa argued that as the calls for the defunding of police departments nationwide persist, one has to question whether change can be effected in such a culture - or if there should be a complete system overhaul.

“When you have an entire system … that is so deeply riddled with impunity and [lack of] respect for the people they’re supposed to be protecting and serving - I don’t know what reform you can put in place that would change that culture,” she said.

“How do we change culture?”