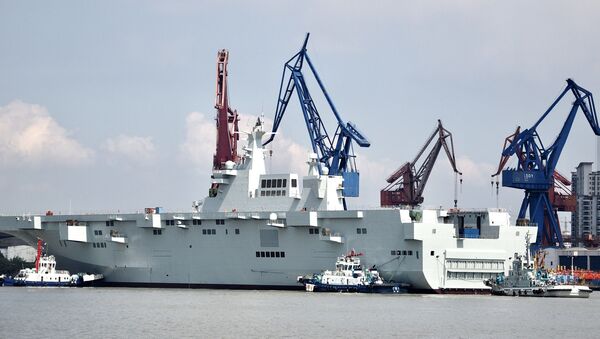 New details have emerged in Chinese media about the proposed Type 076 landing helicopter dock (LHD), a unique variant of that type of warship that would combine a helicopter carrier, a catapult aircraft launching system and a docking area for amphibious landing craft. Sputnik was among the first to report on the new warship.

On Thursday, Sputnik reported on the leaking of documents online pointing to a new type of warship, which military observers had begun calling the Type 076 LHD.

According to the Beijing-based Global Times, the requests came from the 708 Institute, a design bureau for China State Shipbuilding Corporation (CSSC), but the design work has not yet been approved by People’s Liberation Army (PLA) leadership. No formal statement about the Type 076 has been made.

The Hong Kong-based South China Morning Post (SCMP) reported on Monday the Type 076 would likely measure 40,000 tons’ displacement, making it slightly bigger than the Type 075 LHD the PLA Navy has already built two of, and on which the Type 076 will likely be based. This would also make it slightly smaller than the US Navy’s LHAs (its designation for LHDs) of the Wasp-class and America-class, which weigh in at 45,000 tons each.

The Type 076 would likely carry at least 30 helicopters, alongside hovercraft and the land equipment needed by its contingent of hundreds of marines, the SCMP said, meaning its primary role would still be that of an LHD, with its fixed-wing aircraft serving in a supplemental role.

Based on some of these new descriptions, some better mockup graphics have appeared on Sina Weibo. Earlier attempts showed an angled landing area that didn’t interfere with the EMALS path, but now they are shown in a linear arrangement. Moreover, now the mockup is situated next to the Type 075, showing the similarities and differences.

A most intersting side by side comparison of both the Type 075 LHD with the still speculative Type 076 LHD/LHA UCAV carrier.

​Naval commentator Li Jie told the SCMP that rather than preparing for a potential marine assault on Taiwan, the Type 076 would likely “focus on the high seas when China is facing territorial challenges from rival claimants in the region,” with an example being the slew of islands that sit just off the coast over which China has contested sovereignty with several other nations, but especially in the South China Sea.

This would fit with previous speculation from The Drive that even if they’re unarmed, carrier-based stealth UAVs could be used to dramatically extend and amplify the effectiveness of China’s long-range missile arsenal. With a catapult, though, an armed drone also becomes a viable option.

However, Li cautioned that the key feature of the Type 076, its EMALS catapult, can really only begin its full development once it becomes a “mature technology” through the construction and testing of the Type 002 aircraft carrier’s Catapult Assisted Take-Off But Arrested Recovery (CATOBAR) system, which features three EMALS catapults. The new design, China’s first carrier class to use the CATOBAR system instead of having a bow ramp, is expected to be launched next year. Sputnik reported recently that the first two ships of the class have begun their final assembly process in Shanghai.

Beijing-based military analyst Zhou Chenming told the SCMP the Type 076 faced special challenges because of the wide array of responsibilities it could be asked to fill on the battlefield.

“Unlike aircraft carriers that can focus on sea and air defense and combats, the amphibious ships also need to take care of battles on land,” Zhou said. “How to operate the electromagnetic catapult technology, as well as the need for combat on sea, air and land, makes this a complicated and challenging job.”

The US Navy’s Ford-class carriers are currently the only ships to operate an EMALS system, and have done so with considerable difficulty. The electromagnetic system for launching aircraft off the front of the ship and into the sky replaced an older, more proven, steam-based system, but when operating correctly, EMALS can launch aircraft much faster.