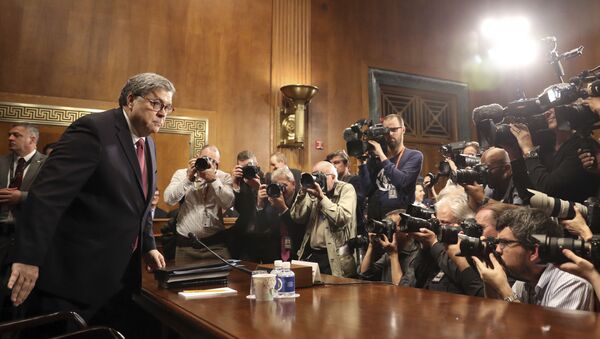 © AP Photo / Andrew Harnik
Subscribe
International
India
Africa
Barr's written remarks largely cover the issues of the Black Lives Matter movement sparked by the death of George Floyd in May that triggered a nationwide wave of protests against police brutality and racism. The demonstrations have not always remained peaceful, with riots erupting and federal agents deployed to cities to quell them.

US Attorney General William Barr is expected to attend his first House Judiciary Committee hearing on Tuesday, with his opening statement published on Monday suggesting he will elaborate on the anti-racism movement that has rocked the United States, especially in light of the chaos taking place in Portland, and oppose congressional Democrats by accusing them of trying to discredit him because of his investigation into the origin of the Russia probe.

According to the published text, Barr will briefly touch upon the so-called "Russiagate" issue, in which he is expected to call it "bogus" and lash out at the Democrats for "attempting to discredit me by conjuring up a narrative that I am simply the president's factotum who disposes of criminal cases according to his instructions".

Barr is purportedly set to deny any alleged interference in his decisions by Trump, and to move on to the racial inequality issue.

"Although the death of George Floyd – an unarmed Black man – at the hands of the police was a shocking event, the fact is that such events are fortunately quite rare. According to statistics compiled by The Washington Post, the number of unarmed Black men killed by police so far this year is eight. The number of unarmed White men killed by police over the same time period is 11. Some unarmed suspects, moreover, were physically attacking officers or threatening others at the time they were shot", Barr is expected to say.

He is also set to mention the country's development towards a more inclusive law enforcement system. Then, his remarks move on to say that African Americans engage in violence toward one another as well, mentioning black-on-black crime.

"The threat to Black lives posed by crime on the streets is massively greater than any threat posed by police misconduct", Barr's remarks read. "The leading cause of death for young Black males is homicide. Every year approximately 7,500 Black Americans are victims of homicide, and the vast majority of them – around 90 percent – are killed by other Blacks, mainly by gunfire. Each of those lives matter".

According to his remarks, the number of black people killed by the police so far this year is 8, while 11 whites were killed during the same time period.

Barr is expected to cite the example being seen in Portland, of "hijacking legitimate protests" over the death of George Floyd while in police custody.

"What unfolds nightly around the courthouse cannot reasonably be called a protest, it is, by any objective measure, an assault on the government of the United States", Barr is expected say in reference to the courthouse recently attacked by Portland protesters, to which Donald Trump responded by deploying federal agents to the city, despite objections from the local authorities.

The attorney general is to claim that the rioters "arrive equipped for a fight, armed with powerful slingshots, tasers, sledgehammers, saws, knives, rifles, and explosive devices",  while "inside the courthouse are a relatively small number of federal law enforcement personnel charged with a defensive mission: to protect the courthouse, home to Article III federal judges, from being overrun and destroyed".

His remarks then move on to note that we must "agree that there is no place in this country for armed mobs that seek to establish autonomous zones beyond government", or to tear down statues and destroy the property of "innocent business owners".

His written speech comes amid violent protests unfolding in Portland, where riots are being quelled by federal agents, who are daily reported to suffer from injuries. Over the past weekend, at least 14 federal agents were injured.