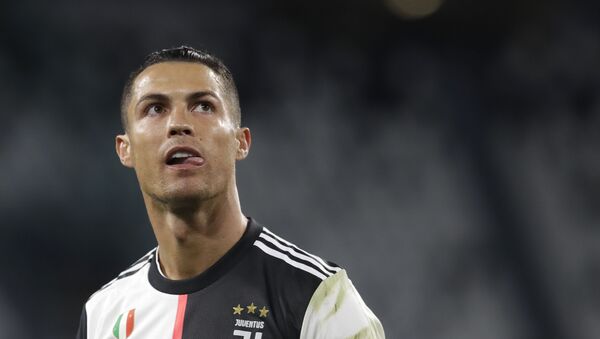 New Delhi (Sputnik): In 2018, five-time Ballon d’Or winner Cristiano Ronaldo joined Juventus on a four-year contract that brought an end to his nine-year stay at Real Madrid. Ronaldo joined the Italian champions for a fee of around $115 million.

Italian giants Juventus clinched their 36th Serie A title with a two-nil victory over Sampdoria on Sunday night to further increase their dominance in Italian football.

After the win, the Portuguese star, who netted his 31st goal of the season, dedicated the title triumph to the club’s fans, especially to those who have suffered or are suffering due to the pandemic.

“There we go! Champions of Italy… so happy for the second consecutive championship and to continue to build the history of this great and wonderful club… This title is dedicated to all Juve fans, in particular to those who have suffered or are suffering due to the pandemic that has caught us all by surprise spilling the world. It wasn’t easy.. Your courage, attitude and determination were the strength we needed to face this championship squeeze and fight till the end for this title that belongs to all of Italy”, Ronaldo wrote in his post.

Juventus were just one point ahead of the second-placed Lazio when football resumed last month after sports activities were shut down due to the COVID-19 outbreak. But despite just winning two games in their last six matches, Sarri’s side has reaped the benefits of their rivals’ shortfalls.

The title triumph takes the Turin club’s tally to 36, exactly twice as many as the titles won by the two Milan Clubs – Inter and AC – who come in second place with 18 titles.

Juventus' manager was quick to single out both Ronaldo and Paulo Dybala after the match, but also stressed that the club’s continued success was the result of significant collaboration.

“The two stars- Dybala and Ronaldo make the difference on the field, so they clearly deserve a lot of credits but the club behind them is every bit as important”, Sarri said during the post-match conference.

He also stressed that with the title in their hands, his team can now focus on Champions League football, which will resume in August.