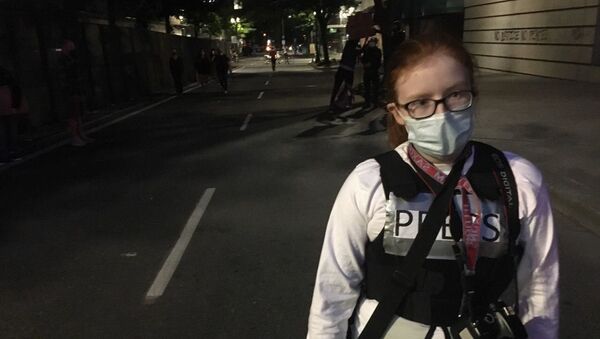 © Sputnik / Artur Gabdrakhmanov
Subscribe
PORTLAND (Sputnik) - The youngest journalist covering the protests in Portland writes for a high school newspaper. Press badges, slight build, and being 17 years of age has proven insufficient to protect Eddy Binford-Ross from police brutality. Yet, almost every night she ventures back to report from the frontline.

From the midst of tear gas clouds and deafening blasts the red-haired editor-in-chief of the Clypian, a student-run periodical of South Salem High School, writes, tweets and takes photos of violent clashes between heavily armed federal law enforcement agents and local youngsters who want them out of the city.

"I am out here because what we are seeing in Portland is completely unprecedented. It’s unlike anything we have ever seen," she explains. "It’s so important that there are people out here that are documenting everything that is happening so that there is an accurate historical record."

Binford-Ross says that while doing so she has been exposed to police aggression several times.

"I have had several flashbangs thrown at me while I was clearly identified as press and was standing off to the side of the crowd," the reporter said.

One officer even pointed a gun loaded with regular ammunition at her.

"Another officer told that officer ‘That’s press, don’t shoot.' The officer with the gun turns his gun away towards the protesters and then a little while later turns it back on me again," Binford-Ross says. 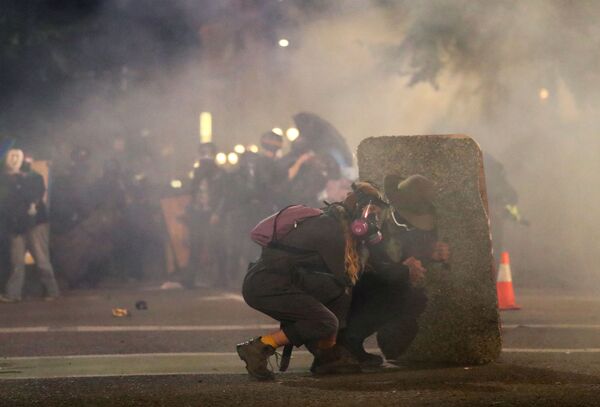 Demonstrators are seen taking shelter behind a shield amid a cloud of tear gas during a protest against racial inequality and police violence in Portland, Oregon, U.S., July 27, 2020.
© REUTERS / CAITLIN OCHS

The other day Binford-Ross, as she describes it, was shoved into a wall despite having her hands up while trying to move out of the way of baton-wielding officers who were running out to disperse protesters.

"It’s certainly intimidating and it’s certainly scary. But it’s so important to have a record of what’s going on here so that people who are unable to be out here... are provided with all the information they need to be informed citizens," Binford-Ross says.

She has clearly visible signs that identify her as press on the front and back of her bullet-proof vest, three more identifying patches are attached to a helmet. 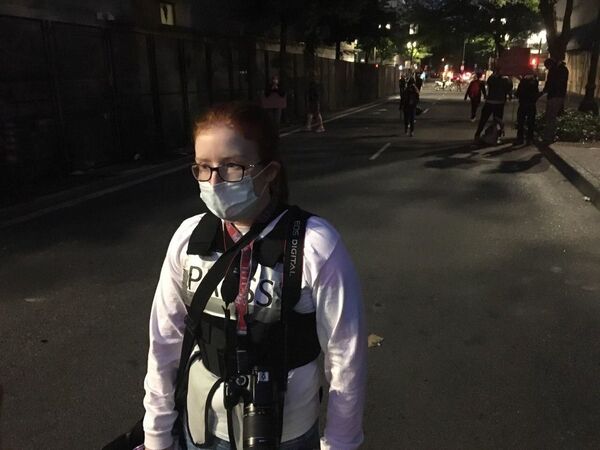 Eddy Binford-Ross, editor-in-chief of the Clypian, a student-run periodical of the South Salem High School in the US state of Oregon
© Sputnik / Artur Gabdrakhmanov

On her tours of duty to a federal courthouse area, the focal point of Portland’s protests, Binford-Ross is accompanied by one of her parents.

"It’s not safe to be out here alone. We are seeing a lot of people getting injured and so it’s super important that someone is out there with you. Part of our safety plan is that I always have one of my parents around," she says. "My mom was covering the last several protests and my dad is here for this one."

Eddy’s father, Chris Ross, stands nearby wearing a helmet, a bullet-proof vest and a gas mask.

He acknowledges there is certainly a potential for getting injured by being out there, but a person could also get hit by a car tomorrow.

"No, I don’t feel like I am putting her in a line of fire," he says. "I’ll do everything I can to support. I think it’s important what she is doing."

Apart from journalism, Eddy likes spending time with her horse, traveling the world, backpacking, following politics and reading, according to her bio on the Clypian website. She graduates from school next year, but is still undecided about what to do next.

Binford-Ross became part of a lawsuit filed by the American Civil Liberties Union (ACLU) against law enforcement agencies over numerous cases of violence against reporters. The watchdog has already extracted from a court a temporary order barring local police and federal agents from using physical force against journalists, arresting them or seizing their equipment in Portland.

They are also not allowed to order correspondents "to stop photographing, recording, or observing a protest." 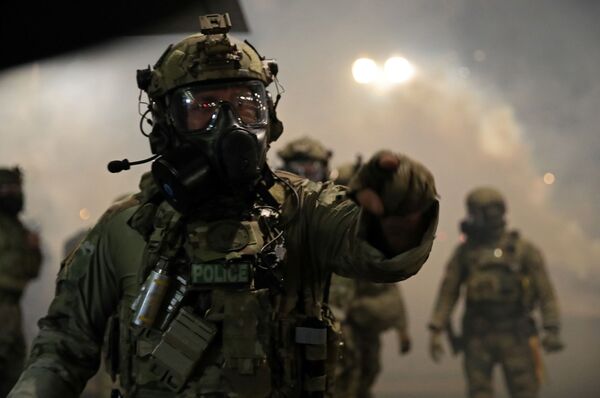 According to the ruling, however, officers shall not be held responsible for "incidentally" injuring media representatives with crowd-control devices, which, like tear gas, are often used indiscriminately.

Luckily for journalists, protesters in Portland are cooperative in contrast to many other localities across the United States where attacks by ideological opponents and emotionally unstable individuals are commonplace, and crowds sometimes aggressively resist being filmed out of fear that video and photo records may be used by the police.

When the court moved to protect journalists, some protesters in Portland started purporting to be "media" or "press" by donning respective insignia. Local police called it a "concerning" phenomenon and said that it "takes away from legitimate media efforts." 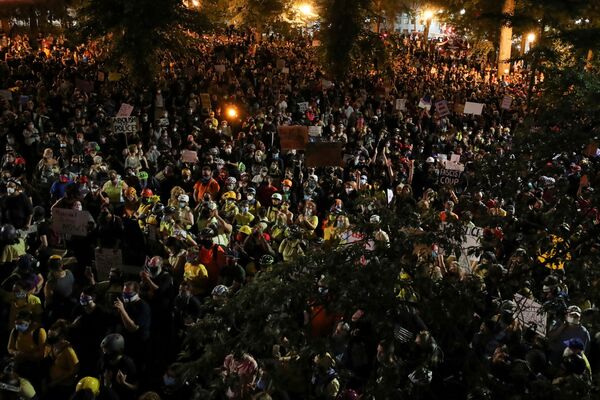 Among scores of journalists exposed to police violence in the city was a crew from Russia's Channel One, a correspondent Yuliya Olkhovskaya and a cameraman Vyacheslav Arkhipov, who last Tuesday sustained injuries and had their equipment destroyed when federal agents unexpectedly advanced to disperse the crowd. They stayed in Portland and continued covering protests using their mobile phones.

"Hey, wind, it would be great if you didn’t keep blowing the tear gas right towards me. It’s not fun. Okay, thanks," she tweets.

On Monday, Portland Police said in a statement that several hundred people gathered overnight on Sunday at a protest that began peacefully outside the Mark O. Hatfield US Courthouse later blocked adjacent streets, launched fireworks and set fires near the courthouse.

“They spent hours yelling, chanting, banging on the fence and throwing objects over it,” the police release said. “At about 11:45 p.m. people began launching mortar-style fireworks over the fence. A short time later people climbed over the fence, entering the portico.”

The police added that at around the same time, a group of protesters lit a large fire in Lownsdale Square Park in downtown Portland. “People in the crowd continually picked at the fence. Some gathered with shields and umbrellas to cover a person trying to cut through it,” it added.

At about one in the morning, somebody started a fire just inside the courthouse fence, the statement said.

“The fire started quickly, grew into large flames on the sidewalk, and was out within about a minute,” the release said. “Following that, dozens of people approached the outside of the fence with shields and began throwing objects over it.”

Protests against police brutality and racism erupted in Portland and other US cities after the death of African American man George Floyd in police custody on 25 May. However, may of the protests have turned into riots complete with violence against police and civilians as well as acts of vandalism, looting and arson.