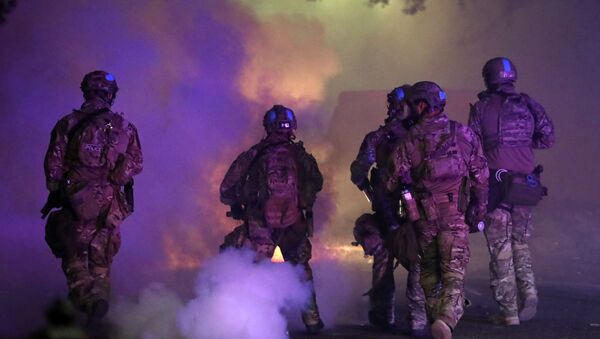 Demonstrations outside the courthouse in Portland have grown increasingly violent as the Trump administration sends in federal officers to crack down on the continuous nightly protests in the city.

Three federal agents who were deployed to Portland, Oregon amid ongoing protests were “likely left permanently blinded” from clashes they were involved in, the White House said on Friday.

“A federal agent’s hand was impaled by planted nails, another federal agent was shot with a pellet gun, leaving a wound deep to the bone, and tragically, three federal officers were likely left permanently blinded by the rioters using lasers pointed directly into their eyes”, said White House press secretary Kayleigh McEnany.

The Trump administration's press secretary said the government "will not stand by and allow anarchy in our streets".

The agents were injured during a confrontation on Monday evening as a 1,000 person crowd of protesters came up to a federal courthouse, according to Fox News.

Demonstrators also threw fireworks at the federal courthouse, and there were threats to cut the building’s water supply, the White House report said.

​The report was corroborated by Richard Cline, deputy director of the Federal Protective Service.

While speaking to reporters on Tuesday, he said that “rioters” began to remove plywood coverings outside the Hatfield Federal Courthouse as well as throw objects through the windows.

Cline also said that a series of fires had broken out during the skirmish, which saw buildings vandalised with spray paint and nearby intersections blocked.

“When officers responded to put out these fires, glass bottles were thrown and lasers — which can cause permanent blindness — were shined in their eyes”, Cline said.

“We have three officers who currently have eye injuries, and they may not recover sight in those eyes from those laser attacks.”

And yet the city of Portland takes little to no action." pic.twitter.com/W22iAKTNJq

Laser attacks continued into Thursday as an estimated 2,000 protesters took to the streets outside the courthouse and justice centre.

​Over 100 federal agents had been shooting tear gas and impact munitions into the crowd, according to The Oregonian.

The protests have taken place for nearly two months amid nationwide unrest in response to the police killing of an African American man - George Floyd - at the hands of white police officers n Minneapolis in May.