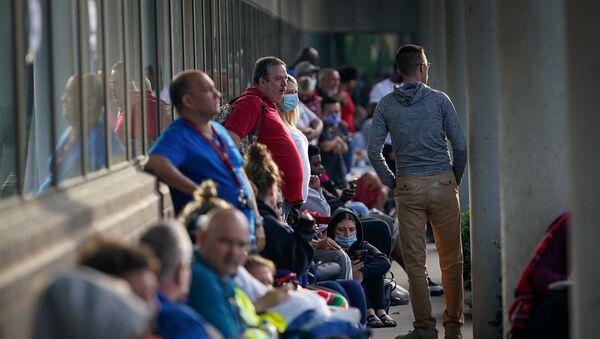 Senate Republicans announced Wednesday a “fundamental agreement” for a $1 trillion coronavirus relief package. However, that is not sufficient to generate an economic recovery, Dr. Jack Rasmus, professor of economics at Saint Mary's College of California, told Sputnik.

“It’s going to take, I've been arguing, at least $4 trillion to really stimulate a recovery, not a rebound,” Rasmus, author of “The Scourge of Neoliberalism: US policy from Reagan to Trump,” told host John Kiriakou on Thursday.

“We’ve had a rebound here, you know, after dropping 30-40% in GDP terms in the second quarter. They opened up the economy, and some people went back to work. That’s why you saw 4.8 million job creation in June, but 3 million of those were people in the service sector and retail sector. And now we have another wave of layoffs. And you see that in the statistics,” Rasmus added.

The latest data from the US Labor Department, released on Thursday, shows that more than 1.4 million workers filed new claims for state unemployment benefits last week, which is the highest weekly tally in over three months.

“By the way, this 1.4 million new unemployment claims figure just came out is really an underestimate, and it really irks me that the mainstream media doesn’t report the accurate number,” Rasmus said, clarifying that “that’s only people filing for new state unemployment claims.”

“So the unemployment numbers are going up, as it looks like there’s going to be little agreement on extending the benefits. If they are extended, they are going to be dramatically reduced, according to the Republicans. We’ve got more and more unemployment, and it’s not just COVID-related unemployment as people are being laid off again with this new wave - that’s what’s driving this 2.4 million new benefit filings up. It’s going to go up higher every week, by the way. But it’s a wave of permanent layoffs,” Rasmus noted.

The White House and Senate Republicans on Thursday failed to agree on a new COVID-19 stimulus package, with the White House scrapping US President Donald Trump’s demand to include a payroll tax cut as part of the measure after his own party fought against it, the Washington Post reported.

There has been tension among the Republican Party over how to respond to the continuing COVID-19 pandemic, with some Republicans criticizing the bill’s $1 trillion price tag as too high amid the increasing national debt. The stimulus package will include another round of direct checks to taxpayers, limited assistance to schools and reduced supplemental unemployment benefits. However, the bill will not include fiscal assistance for state or local governments or any relief for renters who face eviction.

“Maybe part of the reluctance of the Republicans to actually provide a stimulus is because they look at their big business buddies who pay for their campaigns, election campaigns, and they don’t need it. Who needs it are workers in small businesses, so Republicans don’t really see that as their constituency, as far as their reelection is concerned, so they’re not in a big hurry to provide a real stimulus to the economy,” Rasmus said.

“But that’s going to mean that consumption is going to contract again, and it looks like it’s moving in that direction once again, which means GDP and the economy are not going to recover here in the third, fourth quarter. And that means we’re going to have a relapse, and we’re bouncing along the bottom in a typical ‘W’-shaped, weeks-long, protracted recovery,” he explained.

“When I say you got to spend 40% GDP, the government, I mean 40% on programs that put money in the hands of people who will actually need to spend it, not hoard it,” Rasmus added.