New Covid Fashion Trend? Man Wearing a Mask - and Nothing Else - Grabs Shoppers' Attention in London 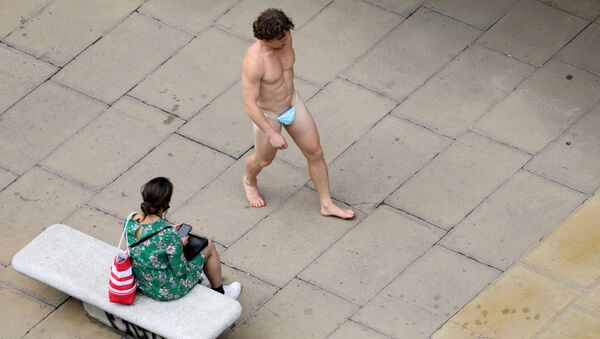 As face masks became mandatory in shops and other enclosed spaces in England on Friday, one person took this guidance to a new extreme, choosing to wear nothing but a mask...to cover his modesty!

Shoppers in London were left surprised after seeing a man strolling down one of its largest shopping streets wearing no other clothing other than a mask. But not on his face as one may have expected.

Many took photos of him on their phones, whilst others stared as he paraded down Oxford St wearing nothing but a light blue mask to cover his modesty.

A Reuters photographer captured the image which has been widely shared on social media.

Man parades down Oxford Street wearing nothing but mask.

A naked man has been spotted walking about on Oxford Street in central London, wearing nothing but a face mask as a sort of makeshift g-string.#London #Coronavirus #WearAMask #Mask #COVID19 pic.twitter.com/gWvCjSub94

Some netizens met the story with humour and old chestnuts:

Lol 😂 been waiting for this to happen. pic.twitter.com/Ev1KjCgl5A

Perhaps he's more worried about catching something 'down there'.

​While others condemned his appearance saying that the man was wearing his mask on the wrong place and should be fined:

If he put one on his nose and mouth TOO, I'd not care. As it is, he's wearing it WRONG.

These are the effects of Covid-19 on the state of mental health. Some immediate measures need to be devised to cater for the mental wellbeing and mental welfare of people him scampering away in the birthday suit.

​This comes as face coverings were made mandatory in enclosed areas such as supermarkets, indoor shopping centres, transport hubs, banks and takeaways in England on Friday.

Those who do not comply with the rules could face fines of up to £100.