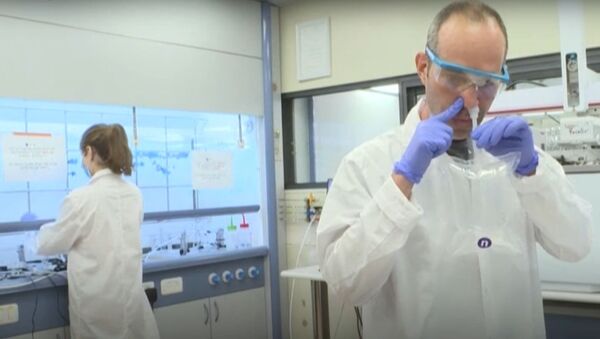 An Israeli company specializing in rapid recognition tests says it is now working on a COVID-19 novel coronavirus test kit that provides results in 30 seconds, which could give people "the confidence to go back and act as normal."

What does the novel coronavirus smell like? One Israeli company thinks it’s figured it out.

NanoScent, an Israeli tech company, told reporters on a recent tour that it is currently developing a 30-second COVID-19 test that would cost around $10 and could help the world return to normalcy.

“Just like you have image recognition, we have scent recognition that we’ve designed,” NanoScent Chief Executive Officer Oren Gavriely told the Philippine Daily Inquirer in a video interview. “And what it does is it detects the smell, or the body’s response to the smell, of COVID and [the novel coronavirus].”

“We pick up on a pattern, we record that pattern, and then we can detect if someone has or is suspected to have COVID-19 or not,” he explained.

Nadav Davidovitch, director of the School of Public Health at Ben-Gurion University in Beersheba, told AFP that NanoScent’s technology is “very promising” and could be a useful tool in the fight against COVID-19 - as long as it receives regulatory approval, that is.

Gavriely explained to AFP that an extensive trial in Israel produced results with 85% accuracy, and the test kit could obtain regulatory approval within months.

Davidovitch expressed that even though the test would provide immediate results, he would not consider the breathalyzer results to be a substitute for state-controlled lab tests.

According to Gavriely, the 30-second test kits would not act as a replacement, but rather as a screening tool to give people "the confidence to go back and act as normal."

Israel, which recently made headlines for its alleged syringe shortage, has reported more cases of the novel coronavirus per capita in the last week than most other countries, according to numbers from the New York Times. Israel currently ranks eighth in cases per 100,000 people confirmed in the last seven days, one place behind the United States. Kyrgyzstan tops the list.

According to the outlet’s chart, there were 134 positive COVID-19 cases reported per 100,000 individuals in Israel in the last week.