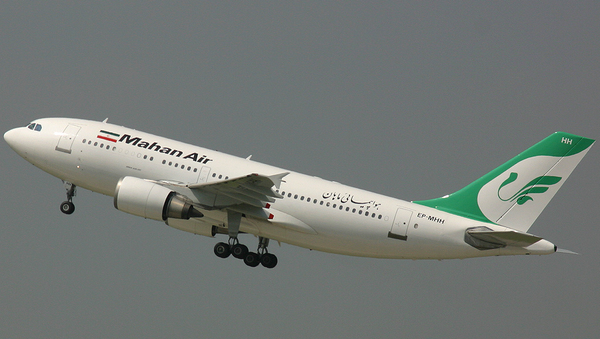 © Wikipedia / Paul Spijkers
Subscribe
A Mahan Air Airbus A310 jetliner with over 150 people onboard was forced to take evasive maneuvers over Syria on Thursday after being intercepted by a pair of US F-15 jets, with the incident leaving at least 12 passengers with injuries of varying severity. Tehran submitted a complaint the International Civil Aviation Organization (ICAO) on Friday.

Iran considers US fighter jets’ maneuvers near its civilian airliner on Thursday to have been an “act of terror,” and has the right to pursue the matter legally, Transport Minister Mohammad Eslami has announced.

“Harassing a passenger plane is a terrorist act. How can a passenger plane that is flying it its commercial route in accordance with aviation protocols be attacked and threatened by another country’s warplanes?” the minister asked, speaking to Iranian media on Friday.

“Unfortunately, 12 people, including the flight’s crew and passengers, have been hurt in this terrorist act,” Eslami added.

The minister stressed that Iran’s representative to the ICAO will follow up on Iran’s complaint, and added that Tehran expects the US’s “terrorist move” to be condemned by the organization. He also called on Lebanon and Syria to file their own separate complaints against the US in the ICAO in relation to Thursday’s incident.

Iran is also expected to submit a letter of protest to the United Nations Security Council and to Secretary General Antonio Guterres.

Also Friday, Mahan Air announced that its plane was flying in full compliance of international air navigation rules when Thursday’s incident took place, and added that its commercial aircraft have been flying the same Tehran-Beirut for over a decade.

The company confirmed that the intercept took place during a stage of the flight when passengers were allowed to unbuckle their seatbelts, and revealed that the plane’s pilot had to abruptly lower the plane’s altitude after receiving an alert on a possible collision.

US Central Command maintains that the intercept was conducted in a safe and professional manner, with its warplanes scrambled to carry out a “standard visual inspection” of the Iranian plane from a “safe distance” as it flew near the US garrison at At-Tanf in southern Syria. CENTCOM says its jets never approached closer than 1,000 meters from the Mahan Air flight.

Laya Joneydi, vice president of legal affairs in President Hassan Rouhani’s administration, said that “the explanations provided so far [by the US side] are unjustified and unconvincing.”

“The harassment of a passenger plane on the territory of a third country is a clear violation of aviation security and freedom of civilian aircraft,” she noted.

Iranian Foreign Minister Mohammad Javad Zarif urged the international community to “stop” the US “outlaws” before they cause a “disaster” in a tweet Friday.

Video footage of the episode showed passengers screaming and emergency oxygen masks deploying from some overhead panels, with one passenger telling media that a “black jet” had approached very close to the passenger aircraft. Several passengers were reported to have hit their heads against the ceiling as the plane took its evasive maneuver, with one passenger seen lying unconscious on the floor in one of the videos. Two children reportedly received hand fractures and were sent to hospital in Beirut.

At least one senior Iranian official compared Thursday’s close call to the Iran Air Flight 655 disaster of July 3, 1988, when the US Navy’s USS Vincennes warship shot down an Iranian passenger jet flying over Iranian airspace in the Persian Gulf, killing all 290 passengers and crew onboard. The US Navy initially blamed the aircraft’s pilots for the incident, saying it had made repeated attempts to contact the plane but received no response. Washington later apologized and issued compensation to the victims’ families, but the USS Vincennes’ crew was nonetheless given medals for their tour of duty, and the ship’s commander received a Legion of Merit award for “exceptionally meritorious conduct.”

000000
Popular comments
Ignore that man Gulag above. Just ignore. A troll with many names, by the way.
armor
24 July 2020, 22:46 GMT5
000000
The Iranians are quite right to condemn the harassment of an Iranian passenger airliner as an act of terror and to take legal action against the US. Those US jets were violating FCC rules in harassing this airliner, and Iran has the right to ensure airline safety. The movements of the 2 F-15's made a couple of aggressive moves that forced the airliner to swiftly drop to a lower level; and some 12 passengers were injured as a result (They had just unbuckled their seat belts at that moment). There was no reason for the F-15 pilots to pull such a stunt .. They must be punished.
Legolas Greenleaf
25 July 2020, 22:56 GMT1
000000
Newsfeed
0
New firstOld first
loader
LIVE
Заголовок открываемого материала
Access to the chat has been blocked for violating the rules . You will be able to participate again through:∞. If you do not agree with the blocking, please use the feedback form
The discussion is closed. You can participate in the discussion within 24 hours after the publication of the article.
To participate in the discussion
log in or register
loader
Chats
Заголовок открываемого материала
Worldwide
InternationalEnglishEnglishMundoEspañolSpanish
Europe
DeutschlandDeutschGermanFranceFrançaisFrenchΕλλάδαΕλληνικάGreekItaliaItalianoItalianČeská republikaČeštinaCzechPolskaPolskiPolishСрбиjаСрпскиSerbianLatvijaLatviešuLatvianLietuvaLietuviųLithuanianMoldovaMoldoveneascăMoldavianБеларусьБеларускiBelarusian
Transcaucasia
ԱրմենիաՀայերենArmenianАҧсныАҧсышәалаAbkhazХуссар ИрыстонИронауОssetianსაქართველოქართულიGeorgianAzərbaycanАzərbaycancaAzerbaijani
Middle East
Sputnik عربيArabicArabicTürkiyeTürkçeTurkishSputnik ایرانPersianPersianSputnik افغانستانDariDari
Central Asia
ҚазақстанҚазақ тіліKazakhКыргызстанКыргызчаKyrgyzOʻzbekistonЎзбекчаUzbekТоҷикистонТоҷикӣTajik
East & Southeast Asia
Việt NamTiếng ViệtVietnamese日本日本語Japanese俄罗斯卫星通讯社中文（简体）Chinese (simplified)俄罗斯卫星通讯社中文（繁体）Chinese (traditional)
South America
BrasilPortuguêsPortuguese
NewsfeedBreaking
06:10 GMTThe Bennett-Lapid Government's First 100 Days: What Promises Have They Broken?
05:52 GMTPowerful Earthquake in Australia Damages at Least 46 Buildings
05:42 GMTUK Reportedly Mulls Joining US-Mexico-Canada Trade Deal as FTA With America Stalls
05:24 GMTBrazilian Health Minister, Who Arrived at UN, Says Contracted COVID-19
04:30 GMTA Sigh That Tells It All: Golden Retriever Wants Attention
04:28 GMTLive Updates: Germany Registers 10,454 New COVID-19 Cases
04:11 GMTFlorida Gov. Orders All State Agencies to Search for Laundrie After Petito's Remains Confirmed
03:43 GMT'Nothing New on That': Bill Gates Brushes Off Question About His ‘Dinners’ With Epstein
03:33 GMTGOP Politicians Stand by US Border Patrol After Claims They 'Whipped' Refugees at Rio Grande River
03:14 GMTPele Cheers Up Fans by Posting Video of Him Riding Exercycle in Hospital
03:07 GMTAxis of Resistance Killed US, Israeli Commanders in Revenge for Soleimani's Assassination - Report
02:56 GMTPolitical Capital & GOP in His ’Grip’: Trump ’Wants Back’ in 2024, Journos Say
01:43 GMTIRGC Chief: Iran No Longer Sees US as Threat - Report
01:18 GMTChinese Covid Vaccines Reach 100 Nations, But WHO Warns Africa Still Short 470 Million Shots in 2021
01:04 GMTAwkward Moment as White House Staff Cuts Off Biden-Johnson Meeting in Mid-Sentence
00:20 GMTVideo: Military Jet Intercepts Small Aircraft Over NYC in the Middle of UN General Assembly
00:19 GMTPark Ranger ‘Implored’ Gabby Petito to Distance Herself From Toxic Relationship With Brian Laundrie
YesterdayVideos: 6.0 Earthquake Strikes Southeastern Australia
YesterdayPro-Reunification Candidate Chang Ya-chung Edges Ahead as Chairman Election in Taiwan’s KMT Nears
YesterdayTexas Governor Vows to Prevent Del Rio Migrant Surge Disaster From Being Replicated