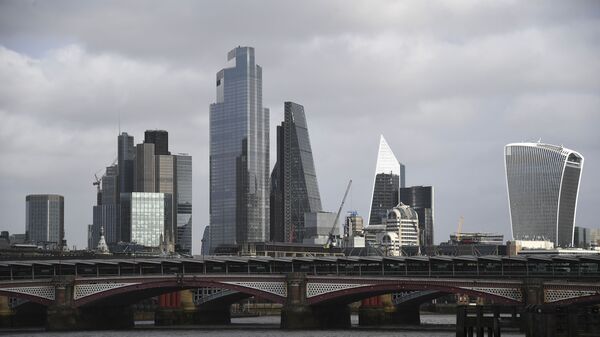 © AP Photo / Alberto Pezzali
Subscribe
International
India
Africa
The fallout of the ‘Russia Report' continues to stir the pot of British politics as the Conservative Party’s finances are under scrutiny once again. It has emerged that 14 Tory MPs have accepted donations linked to Russia, including six members of the cabinet.

Despite the fact these lawful contributions were declared, the media continues to look for links between Russia and possibly corrupt UK officials. But why is the media so focused on Russia in the wake of such an inconclusive report?

Political commentator Alexander Mercouris explains the fallout from the ‘Russia Report’ and why the British media is so obsessed with Russia.

Sputnik: What was your response to the Russia Report?

Alexander Mercouris: Well, I think the reaction is completely out of proportion to its content. It's been accepted in Britain as if it somehow proves some great Russian interference in British political and electoral systems. Well, of course, the report actually does no such thing! Now we have all kinds of threats from the leader of the opposition, no less, to start withdrawing licences from Russian broadcasters which the content of the report itself does not justify but it is symptomatic of the extraordinary paranoia that we see in Britain in relation to everything about Russia. So Russia is constantly on everybody's brain. It's been built up as this great adversary. And we have reports like this, which actually say nothing of substance but which are then instantly seized upon and used in order to pursue various agendas.

Sputnik: Do you think the publication of this report will lead to any significant change here in the UK?

Alexander Mercouris: No, I don't. I don't think so because I think its purpose was to influence the Brexit debate in 2019. In the run up to Boris Johnson's Premiership and the general election in December, and the actual decision whether or not there would be a Brexit. It's important to remember that this report was completed in 2019. And the chair of the committee, which drafted it, was Dominic Grieve, the former Attorney General, a strong opponent of Johnson, a Conservative opponent of Johnson and an arch remainer who was one of those people who was trying to find ways to try and slow the Brexit process down. The fact that it's come out now, in 2020, after Brexit has happened means that its effect has really gone. The only thing it will do is what I was discussing before -  it is going to reinforce the anti Russian paranoia that we already have in Britain by yet a further layer. And given that Britain is now out of the European Union, and is short of friends around the world, it's going to make any establishment of good relations with Russia even more difficult.

Sputnik: You spoke earlier about the lack of substance in the report. Yet, the UK media has really clutched on to the report and viewed it almost as gospel as regards Russian interference. Why is the UK media so quick to attack Russia?

Alexander Mercouris: Well I can remember during the time of the Cold War. When it was the Soviet Union, which really was an adversary, there was far more diversity in the media. There were people who said; we must talk with them. There was all kinds of different views about how to pursue and conduct relations with the Russians in those days. Now, there is this extraordinary monolithic approach, which is to take the strongest possible line you can about Russia. Briefly, what this report said was no evidence exists that the Russians interfered in our electoral processes, no evidence that they interfered in the Scottish referendum and no evidence that they interfered in the Brexit referendum. Some comments about the fact that you know, Russian media cover these stories, but then Russian media have to cover these stories, otherwise, they wouldn't be media.

And yet the British media spins this to prove a narrative of Russian interference, which the actual report doesn't prove or even make. Why is it happening? I think there's two reasons. Firstly, the extraordinary centralisation of media ownership in Britain. This is something which is unfortunately relatively new in our history. The second thing is that an establishment in Britain that feels increasingly that things are slipping out of its control, the Scottish independence movement in Scotland. There's a sense in England itself, Brexit happened, which was a rebellion against the establishment, there was the Corbyn phenomenon, all of that. They're looking for an external enemy, in order to hold things together. The media which has now become very concentrated and very supportive of the establishment now follows that narrative.