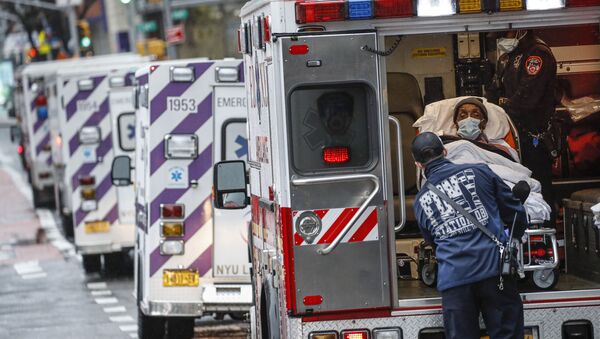 US COVID-19 cases surpassed 4 million on Thursday, with about 2,600 new cases being recorded every hour on average, the highest rate in the world, according to a Reuters tally.

According to Reuters, it only took the US 98 days after its first COVID-19 case was detected on January 21 to reach 1 million cases.

It’s only taken 184 days for the US to reach the threshold of 4 million cases, and the last 1 million cases have been added over 16 days at a rate of 43 per minute, according to Reuters.

A tally by Worldometer shows that the number of COVID-19 cases recorded so far in the US is 4,129,405, and 146,665 people have died in the country due to the disease. The latest data by Worldometer also shows that more than 15 million cases of the virus have been confirmed worldwide, and more than 632,000 deaths have resulted.

During a press briefing on Tuesday, US President Donald Trump also shifted his rhetoric about the threat of COVID-19 and urged Americans to wear face masks after resisting doing so himself for many months.

In addition, he acknowledged that the pandemic “will get worse before it gets better.” On Monday, the president also tweeted a photo of himself wearing a mask and described the act of wearing one as “patriotic.”“We are United in our effort to defeat the Invisible China Virus, and many people say that it is Patriotic to wear a face mask when you can’t socially distance,” Trump tweeted Monday afternoon.