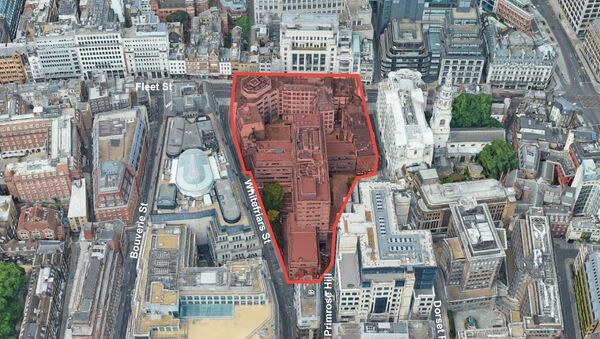 The City of London is also known as the Square Mile, the financial district and historic centre of London. It is run by the City of London Corporation, which claims to be the “oldest municipal democracy” in the world.

The City of London Corporation has announced plans for a huge new police and courts complex on Fleet Street, the traditional home of the British press.

The proposals would see the construction of a complex which would have 18 courtrooms and a new state-of-the-art headquarters for the City of London Police, which investigates a lot of financial crime in the Square Mile.

City of London Corporation has announced plans for a new state-of-the-art courts and police complex in Fleet Street (sketch below). It will eventually take on most of London's most serious fraud cases, which tend to be heard at Southwark Crown Court. pic.twitter.com/6crsrYe7V5

​The site is only a few hundred yards from the Old Bailey - which hosts the most serious trials in London - and it is thought that the new courts, when completed, will take on a lot of serious fraud and corruption cases, which are currently heard at Southwark Crown Court.

Britain’s Courts Minister Chris Philp said: "London is the global leader in law. People the world over choose English law for their contracts and London’s courts for dispute resolution. Our legal system is an essential part of our economy."

He added: "This new court, with 18 courtrooms, will strengthen our justice system and help us crack down on fraud and economic crime. It will enhance our global reputation, attracting even more of the world’s most dynamic companies to conduct their business here."

​The masterplan - designed by award-winning firm Eric Parry Architects - would be funded by a commercial development on the same site.

Catherine McGuinness, Chair of the Policy and Resources Committee at the City of London Corporation said: “This project aims to deliver a new civic hub that will house a state-of-the-art combined court and a new headquarters for the City of London Police in the heart of the Square Mile’s legal and financial services cluster.”

​The courts will be leased from the City of London Corporation for a “peppercorn” rent, meaning a nominal sum.

The site - officially known as 68 – 71 Fleet Street and currently occupied by an office block built in the 1970s - was bought from the Royal London Group in 2018.

I’m delighted to announce that @cityoflondon will be working alongside @TheFCA on a digital sandbox pilot to support innovative UK firms. Now is the time to get behind our brilliant #fintech sector as part of the global economic recovery. 👇https://t.co/cStCEVQEEX

​The new courtrooms will replace the City of London County Court and City of London Magistrates’ Court which are described as “no longer fit for 21st century justice”.

The City of London Police is currently housed in four buildings. Its Wood Street police station was recently sold and decisions about the future of its Guildhall Yard headquarters and Bishopsgate police station will be announced later this year.

The corporation intends to submit an planning application later this year.

Fleet Street was the home of English newspapers for centuries, starting in the 1500s. The last paper moved out in the 1980s and Reuters news agency moved elsewhere in 2003 but the press are still often referred to as "Fleet Street".