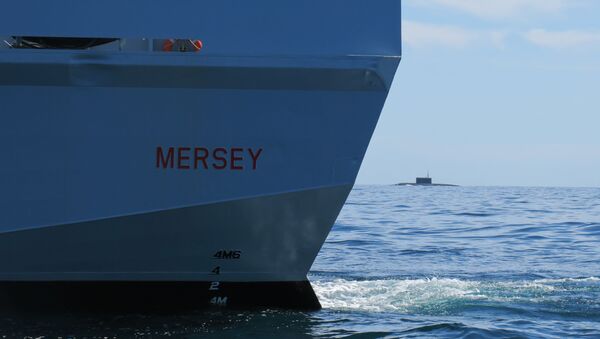 © Photo : Royal Navy/twitter
Subscribe
Russian submarines and other warships regularly pass through the waters adjacent to the UK and France on their way to the Mediterranean and Black seas, with the subs doing so in a surfaced position and often accompanied by support vessels.

A pair of Royal Navy warships intercepted and shadowed a Russian Project 636.3 Varshavyanka-class submarine (NATO codename Improved Kilo), believed to be the B-265 Krasnodar, as it sailed past the UK’s south coast and on into the North Sea, the Navy has said.

Keeping watch. @hms_tyne and @hms_mersey have shadowed a surfaced Russian submarine as it passed through the waters close to the UK.

The Russian vessel is said to have made its passage through the English Channel between 19 and 21 July, with the HMS Tyne River-class offshore patrol vessel tasked with following the sub before being relieved by the HMS Mersey, another River-class patrol ship, as the Russian vessel entered the North Sea.

“HMS Tyne and HMS Mersey watched every movement of the Kilo-class submarine, Krasnodar, after picking up monitoring duties from French light frigate FS Enseigne de vaisseau Jacoubet off the coast of Ushant Island in Brittany on Sunday,” the Navy said in its press statement.

Accompanying the Krasnodar was the Sergei Balk, an ocean-going support tug.

According to Forbes defence contributor and open source intelligence analyst H. I. Sutton, the Krasnodar left Tartus, Syria on 1 July, and has been tracked as it made the trek from the Mediterranean toward the Baltic Sea, with St. Petersburg being its possible final destination.

The Russian sub has been sailing in surfaced mode, and has made no attempt whatsoever to hide its position. The Russian defence ministry has not yet commented on the shadowing incident, although previously expressed “surprise” at the tenacity of the Royal Navy’s efforts to trace, track and shadow Russian subs travelling at low speeds, in surfaced mode, and accompanied by a tug, following a similar incident in 2016.

The Daily Mail reported on this week’s incident, but erroneously referred to the Krasnodar as a ‘Soviet-era’ attack sub “built in the Soviet Union for the Soviet Navy in the 1980s,” even though it’s actually a relatively new vessel, commissioned in 2015. It’s possible that the newspaper mistook the upgraded Project 636.3 submarine for its Soviet Project 877 predecessor.

Project 636.3 is a class of diesel-electric attack subs designed by the Rubin Design Bureau and built by a handful of shipyard across Russia. Along with torpedoes, some versions of the sub are capable of carrying Kalibr land-attack and anti-ship cruise missiles, as well as sea mines and surface-to-air missiles. The Krasnodar itself is Kalibr-armed, and fired multiple missiles at Daesh (ISIS)* targets in Syria in 2017.