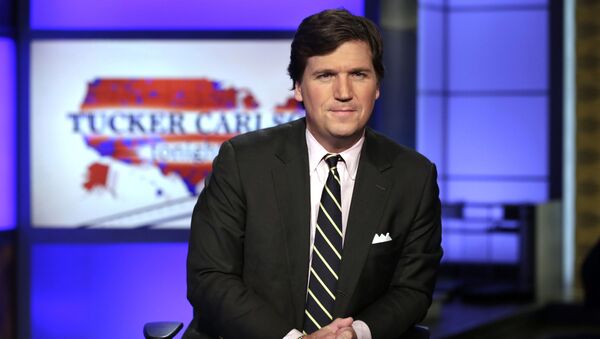 While some social media users went on to criticize both Hannity and Bezos, others took note of Carlson's facial expression during the news show.

A Fox News show on 21 July featured a somewhat awkward moment when hosts Tucker Carlson and Sean Hannity seemed to disagree on the subject of Amazon CEO Jeff Bezos' wealth.

According to the Daily Caller, the apparent disagreement took place during the hand-off, after Carlson finished speaking with The Spectator editor Chadwick Moore about the $13 billion Bezos "added to his net worth Monday".

"Now 20 years ago if that had happened, if a captain of industry had made $13 billion in a single day while the country got poorer, the Democratic Party would have something to say about it. Not anymore, because people getting rich are members of the Democratic Party", Carlson said.

​Yet as he handed things over to Hannity, the latter immediately proceeded to say that "people can make money" and that "they provide goods and services people want, need, and desire".

In response, many social media users proceeded to criticize both Hannity and Bezos.

Hannity is terrible and completely missed @TuckerCarlson point. His point was the hypocrisy of how economic inequality is a left talking point. But, they never mention Jeff Bezos amassing $13B in one day b/c he is a donor.

Bezos is making money at the expense of his workers. They are underpaid and receive no vacation or sick pay, so it is said. He also pays no tax, so it is said. Now this stinks and it is not or should not be America Mr. Hannity.

Hannity is jealous as hell of Tucker. Tucker has overtaken Hannity in viewership and popularity and Sean can’t stand it.

​And some have also taken note of Carlson's reaction at Hannity's words.

​Later, Hannity apologized on Twitter for "any misunderstanding to Tucker and the Fox audience", insisting that he supports "freedom and Capitalism", not “people taking advantage of a pandemic".

I apologize for any misunderstanding to Tucker and the Fox audience. I support freedom and Capitalism. Not people taking advantage of a pandemic. If I see such evidence I will obviously condemn it.