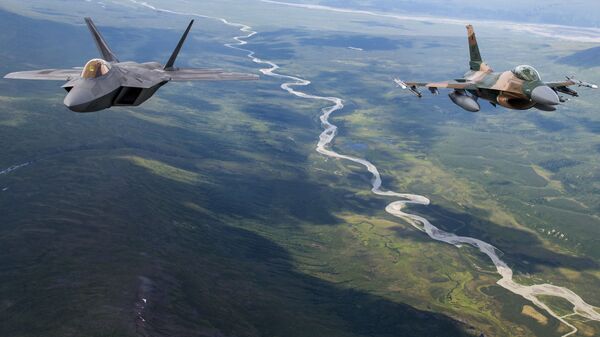 WASHINGTON (Sputnik) - The US plans to counter growing threats to its interests in the Arctic by upgrading systems to detect enemy missiles with over-the-horizon radar and satellite surveillance while responding to threats with fifth-generation aircraft such as the F-35 at bases in Alaska and possibly Greenland, the US Air Force said in a report.

"The DoD’s [Defense Department’s] ability to detect threats and defend North America is challenged by rapidly advancing strategic competitors’ capabilities. Today’s threats have longer range, better precision, and lower radar cross-sections. To counteract evolving threats: The Department of the Air Force will enhance its missile defence surveillance system in the northern tier … through new technologies ranging from over the horizon radar to space assets", the report said on Tuesday.

Strategic competitors include Russia which "may leverage ostensibly defensive capabilities for other purposes", and China’s attempts to gain a regional role to harvest rare-earth deposits, hydrocarbons, and fisheries, the report read.

The report calls for investments in missile warning systems, as well as command, control, communications, intelligence, surveillance, and reconnaissance capabilities, combined with using bases in Alaska and Greenland "to project combat-credible, all-domain air and space power".

Positions in Alaska, including Eielson Air Force Base, will host an "unparalleled concentration of fifth-generation fighters to "present a highly-effective power projection capability", along with other air assets based in Greenland, the US Air Force added.

The report briefly mentioned the need to upgrade a system of 50 aging radar stations, mainly in Canada, that is part of the Cold-War era North American Air Defence System, by calling on the United States and Canada to "identify materiel and non-materiel solutions to the North Warning System".

The report dealt exclusively with the future of air-and-space military assets without mentioning other aspects of the US Arctic strategy, such as plans to build heavy icebreakers needed by the Navy and Coast Guard to patrol the region.