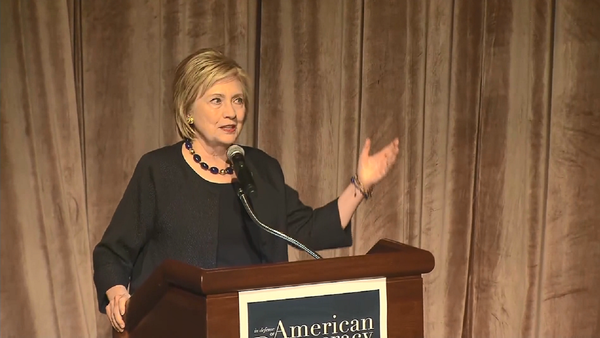 Oleg Burunov
All materialsWrite to the author
Earlier this month, President Donald Trump signed the clemency order for Roger Stone, calling the charges against his former campaign adviser "unfair" and noting that the 67-year-old had "already suffered greatly".

Former US Secretary of State Hillary Clinton has claimed that President Trump's recent move to commute Roger Stone's sentence is allegedly nothing but POTUS’ attempt to keep his former campaign adviser from talking, but about what exactly Clinton failed to clarify.

In an interview with MSNBC on Monday, she asserted that Trump’s clemency order was made to “basically shut up Roger Stone so that Roger Stone would not spill any more beans about what actually happened and what Donald Trump actually knew”.

"This is a continuation of the cover-up”, Clinton claimed without elaborating on what Stone could have disclosed to federal prosecutors.

The former Secretary of State also accused Russia of meddling in the 2016 US presidential election, arguing that Moscow will allegedly so again during the 3 November vote.

“It's very clear that Russia succeeded. They believe that they were able to influence the minds and even votes of Americans, so why would they stop? They really want to pursue their agenda of dividing us”, she asserted.

General Milley Tells US Congressional Panel No Evidence of Russian Bounties in Afghanistan
Last year, then-Special Counsel Robert Mueller’s probe failed to find sufficient evidence to prove allegations of a conspiracy between the Trump team and Russia to rig the 2016 election.

During the interview Clinton also dwelled on last month’s New York Times report about alleged Russian bounties to the Taliban in exchange for killing US soldiers in Afghanistan.

“He [Donald Trump] still as president of the United States has yet to say anything about bounties on American troops”, she noted. The Trump administration has repeatedly dismissed the report, citing the lack of any proof, with POTUS describing “the Russia Bounty story” as “just another made up by fake news tale that is told only to damage me and the Republican Party”.

Earlier this month, the White House said in a statement that US President Donald Trump had signed an order commuting the "unjust" sentencing of his former campaign adviser Roger Stone who was arrested by the FBI in January 2019.

“Mr Stone was charged by the same prosecutors from the Mueller investigation tasked with finding evidence of collusion with Russia. Because no such evidence exists, however, they could not charge him for any collusion-related crime. Instead, they charged him for his conduct during their investigation”, the statement pointed out.

Trump’s move angered Democrats, who accused the president of eschewing the rule of law in order to protect his political ally.

POTUS responded by saying that Stone had been targeted in an illegal "witch hunt that never should have taken place", referring to the probe into the alleged Russia-Trump collusion ahead of the 2016 election.