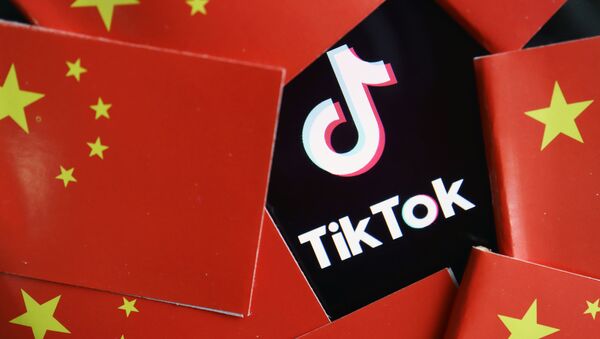 © REUTERS / FLORENCE LO
Subscribe
International
India
Africa
The development comes a week after the United Kingdom banned Chinese telecom giant Huawei from developing Britain's 5G network in a move that analysts and some UK officials said was reportedly influenced by pressure coming from the Trump administration.

Video sharing application TikTok poses as much threat as Huawei, senior members of Britain's Conservative Party said in a statement. Former leader of the party Sir Iain Duncan Smith said the application is too close to "Chinese intelligence services".

"TikTok is the product of a company called ByteDance which has roots everywhere at the moment, a bit like Huawei. They're growing like mad. Everybody is now reviewing the company. There are real, serious concerns, as big as with Huawei, over the role that (intelligence agencies) play”, Sir Iain Duncan Smith told The Times.

His statement was echoed by Tom Tugendhat, chairman of the Foreign Affairs Committee, who noted that democratic countries should be aware about the partners they are working with and the reputation they have in their own countries. "Companies like ByteDance [TikTok's China-based owner] raise serious questions about who they're willing to work with and what that cooperation will enable", Tugendhat said.

The statements come a week after Britain banned Chinese company Huawei from developing the UK's 5G network over security concerns. London's intention to ditch the telecom giant is an about-face, when after months of deliberations the British government ruled that Huawei's equipment could be used in the UK's 5G network.

Experts believe that London's decision last week was purely political and was the result of pressure from the United States. US Vice President Mike Pence previously warned Downing Street that doing business with Huawei may hamper Britain's chances of striking a post-Brexit trade deal with the United States.

It seems that TikTok may meet the same fate as Huawei in UK and the United States. High-ranking officials from the Trump administration claim that the information of people using the application can be accessed by China and the country's intelligence agencies. At the beginning of the month, US Secretary of State Mike Pompeo said that the White House may ban TikTok in the United States.

China Has Whip Hand, Not UK

TikTok has categorically denied the accusations. "The suggestion that we are in any way under the thumb of the Chinese government is completely and utterly false", said Theo Bertram, the company's head of public policy for Europe, the Middle East, and Africa.