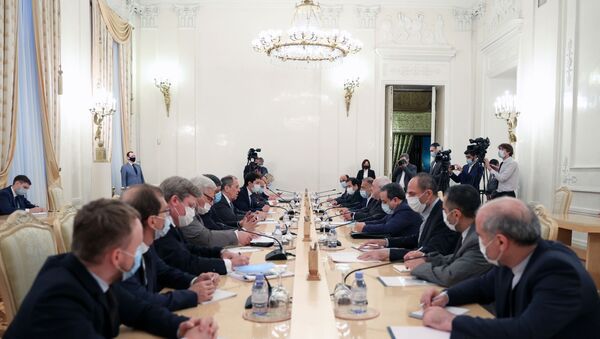 Extending an arms embargo against Iran would lead to the dismantling of the JCPOA, Iran's Foreign Minister Mohammad Javad Zarif said in the course of talks in Moscow with his Russian counterpart Sergei Lavrov.

The Iranian minister also highlighted that Moscow has been opposing Washington’s "destructive" and "very dangerous" actions against the JCPOA within the framework of the International Atomic Energy Agency (IAEA) and in the United Nations Security Council.

"This lead to the fact that the role of Russia and the role of China in preserving the JCPOA become very prominent, and all the international community is recognising it", Zarif said.

Lavrov, for his part, stressed that any attempts to make the arms embargo against Iran indefinite are illegitimate, adding that such actions by the United States will not be successful.

"The UN Security Council did not impose an arms embargo in the full sense of this word against the Islamic Republic of Iran, the Security Council introduced a permissive regime for the supply of certain types of weapons to Iran, this regime is applied for a limited period of time, this period expires in October, and any attempts to somehow take advantage of the current situation, to extend this regime, and then introduce an indefinite arms embargo, have no legal grounds, neither political nor moral", Lavrov underlined.

"We view this meeting as an important stage in the joint efforts that the remaining members of the JCPOA are now taking to preserve this most important achievement of multilateral diplomacy. We consider the line that our American colleagues took to completely unravel this important document to be destructive, as has been the case with other documents on non-proliferation. Nevertheless, we are confident that chances for the JCPOA to return to a stable course still remain, at least we, like our Iranian friends, are doing our best to this end", Lavrov said at the beginning of the meeting.

He added that China and the remaining European members of the deal seem to be willing to preserve the agreement as well.

Iran's Foreign Minister arrived in Moscow earlier in the day. The last visit of an Iranian minister to Russia was in mid-June. The meeting comes days after the Iranian nuclear deal, also known as the Joint Comprehensive Plan of Action, marked its fifth anniversary on 14 July.

The JCPOA agreement has been in crisis since May 2018, when the United States unilaterally withdrew from it and reintroduced sanctions on Tehran. Now, Washington is seeking to extend the UN arms embargo on the country, which is set to expire in mid-October. Russia and China oppose the move, arguing that the arms embargo is to be lifted five years after the deal's adoption, under the JCPOA.