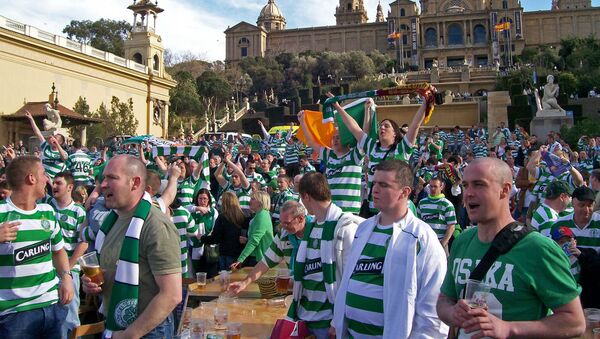 Tommy Sheridan
All materials
After writing this column I will most definitely be checking the sky for two moons. Maybe even hell has frozen over.

I am a very proud and passionate supporter of Glasgow Celtic football club and I have written of my love for them often. Our fiercest rivals for many decades are another Glasgow team called Glasgow Rangers. Singing their praises is alien to me. However, credit where it is due. The current managing director and several current players have issued stinging comments recently condemning racism and hatred and promoting equality. This after facing online abuse from so-called football fans, some even apparently Rangers fans, for taking the knee in support of the #BlackLivesMatter cause during the recent friendly football tournament in Lyon, France. Given the enormity of the issue I cannot ignore those welcome statements.

Rangers have several leading black players and one of them, Conor Goldson, confessed he and others were “hurt” by the backward and racist comments that followed their symbolic gesture before games against Lyon and Nice.

In fact, the statement issued by the player has earned him respect in my eyes. It was hard-hitting precisely because it was so straightforward. I mean how the hell in this day and age can standing up to racism even be a source of debate?

After some nasty comments were posted in relation to an Instagram photo of him taking the knee the big fella had the courage to post another, with his right fist symbolically raised and clenched. Alongside it he wrote:

“Let’s try again. The hate and ignorance in the comments of the last picture were disgusting but not surprising. This isn’t about politics it’s about equality!!! We all need educating, myself included!”.

“I’m not doing this for attention, or for anyone to feel sorry for me. But these are fans of OUR club. I know it’s a minority and I’m not suggesting otherwise, however as a majority who stand by us we need to make a stand to be heard.

“What I will say is players see these comments and they hurt us!”.

Its not “about politics” it’s “about equality”. “We need to make a stand to be heard”, says Goldson. Spot on.

Another Rangers player, Alfredo Morelos, was subjected to racist abuse last Friday night in connection with his support for the ‘taking the knee’ gesture of support for #BLM. He posted a photo and an Instagram message which allowed comments. That abuse is now the subject of a criminal investigation and if the culprit really is a Celtic supporter as his strapline suggests he should be ashamed of himself and banned from football grounds for life if found guilty.

Racism and Hatred Must Be Condemned by Everyone Says Rangers Director

Today the current Managing Director of Rangers, Stewart Robertson, issued a short but powerful statement of support for the players subject to abuse and an unequivocal condemnation of racism and hatred which is very welcome in these tense and challenging times for minority communities in Glasgow and across the world:

"Alfredo Morelos was the victim of racist abuse via social media on Friday evening. This hate crime is now subject of a police investigation.

This is unacceptable, cannot be tolerated and must be condemned by everyone in Scottish football and society as a whole.

Furthermore, as a club, we stand firmly behind our players who have taken a knee prior to recent games. This is a strong stance against racism.

We will work tirelessly to protect our players every single day and will not tolerate the abuse or hatred that some have had to endure in recent days.

To be clear, if you are unable to support our players, regardless of their background, you are not welcome at Ibrox. Rangers is a club for all.

‘Everyone Anyone’, our ground-breaking diversity and inclusion initiative, celebrates its first anniversary on Wednesday. Recent incidents highlight the importance of our campaign which we will continue to drive forward."

Sectarianism and Bigotry Is Just as Vile as Racism

Again, well said indeed. Refusing to tolerate ‘abuse’ or ‘hatred’ directed against their own players must, of course, be extended to the players of other clubs. And the racism and hatred referred to must encompass bigotry and anti-Irish hatred. Rangers are a club long associated with anti-Catholic sectarianism and the bigotry that breeds. Throughout my upbringing in Glasgow in the 1970’s and 1980’s they would refuse to sign a Roman Catholic player. When football scouts from Rangers attended our Pollok United Boys Club football games to try and spot emerging talent they always had to ask which school the youngster attended before pursuing interest as attendance at a Catholic school made you ineligible for Rangers in those days.

It wasn’t until July 1989 that the discriminatory and bigoted ‘no-Catholics’ signing policy was ditched. It was front page news in Scotland with the largest circulation paper at that time splashing:

Followed by a telling lead sentence:

“Scotland was stunned yesterday when Rangers broke their no-Catholic barrier in the most sensational way ...”.

The fact the player in question, Maurice Johnson, was both a Roman Catholic and a former Celtic player who reneged on a deal to re-sign for Celtic for a much larger signing on fee and contract with Rangers added fuel to an already raging fire. But imagine any football club, sporting organisation, company or other public organisation refusing to sign a person or allow them to work for a company based on their religion? It is an outrageous form of discrimination and yet that was the norm at Glasgow Rangers for almost seventy years.

Prior to the First World War, Rangers did not have any policy regarding players' religion, and at that time the club did have a number of Catholic players. In the 1920s, following the rise in popularity of the Orange Order in Glasgow where Rangers players and directors attended functions, Rangers quietly introduced an unwritten rule that the club would not sign any player or employ any staff member who was openly Catholic. An indication that the policy was specifically anti-Catholic rather than Protestant-only was Rangers' signing of Egyptian international Mohamed Latif in 1934.

It’s little wonder then that one of the regular songs chanted with venom by Rangers fans even today is a hate-filled and bigoted dirge that refers to the ‘Billy Boys’ being ‘up to their knees in Fenian blood’. It is an anti-Catholic anthem and if the fine words of Rangers managing director, Stewart Robertson, toady are to carry any meaning then such anti-Catholic and anti-Irish behaviour and songs must be unconditionally condemned.

‘Football is nothing without the fans’ was the wise maxim of Celtic’s record-breaking manager Jock Stein, the first UK manager to lead a team to European Cup glory, five trophies in a single season and nine successive league titles. An incredible fete achieved with a team of both Catholic and Protestant players who, apart from one, all lived within a ten-mile radius of Glasgow (the other was Bobby Lennox and he lived thirty miles from Glasgow). Such a truly local achievement will never be matched. Jock is Glasgow Celtic’s most successful manager, yet he was Protestant not Catholic.

Racism, Bigotry and Sectarianism Are Vile Societal Problems of Ignorance

Caustically Jock once addressed the discriminatory signing policy at Rangers with characteristic wisdom when he said if he was offered a Catholic player and a Protestant player, he would sign the Protestant. When asked why he said: "Because I know Rangers would never sign the Catholic".

Racism, bigotry, sectarianism, and the ignorance which spawns each of those poisons is a societal problem not solely a football one. However, sport is supposed to be a unifying pursuit based on enjoyment, friendship, and common endeavour. It would be dewy eyed nonsense to suggest my football club does not have some racist and sectarian elements within its support base but I refuse to accept the mainstream media claim that it is tit for tat and one is as bad as the other. That is simply not true.

Not all Rangers fans are bigoted or racist. I fundamentally believe that. However, a larger section of Rangers fans is prone to racist and sectarian bile than is the case amongst Celtic fans. Indeed, given the large Irish heritage present within many Celtic supporting households it would be doubly ignorant for them to harbour racist beliefs and opinions. Just like the blacks, Asians, and other ethnic minorities the Irish suffered decades of discrimination within Scotland and the UK based on their nationality and Catholic religion. The ‘No Irish, No Blacks, No Dogs’ signs that adorned many hotels and pubs throughout the 1950’s and 60’s should never be forgotten by Celtic fans.

Day of Shame for Celtic Fans Will Never Be Repeated

The saddest day of my life as a Celtic fan was attending the New Year Derby against Rangers on 2nd January 1988 at Parkhead, Celtics’ home. We won the match by two goals to nil and I should have been elated but I stood in the Celtic end with an Irish Protestant socialist friend who had never attended a match and witnessed obscene racist chants directed against black Rangers player Mark Walters making his debut that day. A barrage of verbal abuse was accompanied with scores of bananas thrown in his direction. I was disgusted. This was not the Celtic I had grown up supporting. Incidentally Rangers had to also ban some of their own fans for racially abusing Walters when he made his home debut.

Such behaviour today would simply not be tolerated at Celtic Park. The fan base is one of the most progressive in the world. The winning of awards for charitable causes generally and in support of Palestine and Palestinian children is evidence of that.

Rangers won the friendly tournament in Lyon and although it makes me uncomfortable seeing them winning anything, I am pleased a Scottish team triumphed over two French sides that are considered top teams. Yes, they were only friendly games, but bragging rights are bragging rights. I sincerely hope it is the only trophy Rangers win this season but in relation to the anti-racist actions and comments of their players and managing director over the last few days I applaud them and urge them to extend their just fight for equality and tolerance to those of an Irish and Catholic persuasion.