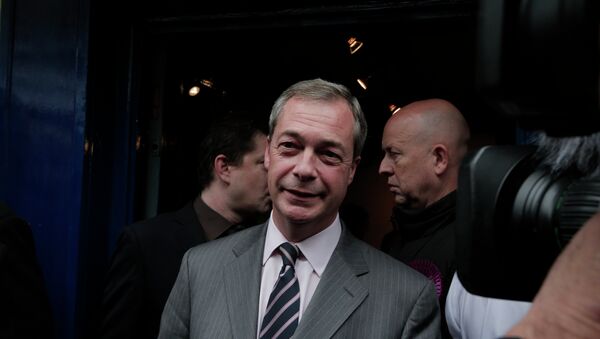 © AP Photo / Lefteris Pitarakis
Subscribe
International
India
Africa
MOSCOW (Sputnik) - Brexit Party leader Nigel Farage said on Tuesday that no evidence of Moscow's interference in the 2016 referendum have been traced and that London is now expected to apologise for the claims, ahead of the publication of the long-awaited report into Moscow’s alleged meddling.

On Monday, the UK parliament's Intelligence and Security Committee said that it would publish the report on alleged Russian interference in the Brexit referendum and the 2017 general election at 10:30 a.m. (09:30 GMT) on Tuesday. The Telegraph reported the same day that the report was expected to reveal Russia's attempt to influence the result of the Scottish Independence Referendum but not the Brexit vote.

​London has long accused Moscow of interfering in its domestic affairs, despite the Russian government’s firm denial of such claims. The parliamentary committee report was completed in March 2019, although the UK government has previously taken steps to stop the document from being published.

Prime Minister Boris Johnson in November said that he had seen "no evidence" of Russian interference in the UK democratic process. Leading Russian officials, including Foreign Minister Sergey Lavrov and the country’s ambassador in London Andrei Kelin, have both categorically denied all of the accusations made by UK lawmakers, citing a lack of credible evidence.