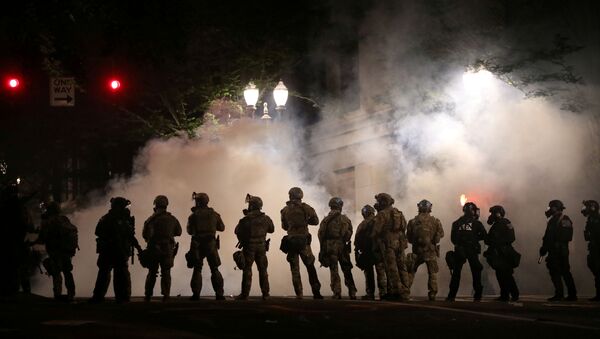 Amid condemnation of the violent repression of anti-racist protests by federal police, the head of the Department of Homeland Security (DHS) said on Tuesday the agency "will not retreat" from Portland, Oregon.

"Smear attacks leveled against officers are disgusting," Acting Homeland Security Secretary Chad Wolf told reporters on Tuesday. "These officers are not military … they are civilian police officers, they are not storm troopers … this description is offensive."

"If you’re looking to peacefully protest, do it away from violent riots," Wolf continued, noting that violent rioters "need to find another line of work … we will not retreat."

He later added, "I'm ready to pull my officers out of there if the violence stops," noting the violence was continuing because local politicians were not "doing your jobs."

"If we left tomorrow, they would burn that building down," Wolf asserted about the federal courthouse in Portland that has been the focus of the protests in recent weeks.

The acting DHS chief would not give exact numbers about how many agents had been dispatched to Portland, simply that it was "a force now that can protect our federal property."

Wolf's comments come after days of violent repression of protests in Portland, Oregon, that have featured federal officers from Customs and Border Protection (CBP), Immigration and Customs Enforcement (ICE), the US Marshals Service, and Federal Protective Service, among others, freely engaging in violence against protesters. Not all of those agencies are part of DHS. This has included not only unprovoked beatings and prolific use of tear gas and pepper spray, but also kidnappings by cammo-clad officers in unmarked vans.

The acting DHS chief previously described Portland as "under siege" and vowed to “bring an end to the violence perpetuated by anarchists" when he arrived in the northwestern city last week. The DHS published a list of allegedly violent crimes justifying the forceful presence of federal police in the city, but most of the items on the list were graffiti and dismantling of fences.

Wolf said on Tuesday that since July 4, federal police had carried out 43 arrests in Portland. Officials did not indicate how many of the arrested individuals have been officially charged with a crime.

Oregon lawmakers, including Portland Mayor Ted Wheeler, who is also the city’s police commissioner, and Oregon Governor Kate Brown, have all denounced US President Donald Trump's dispatching of federal police to Portland, in some cases curtly telling the officers to leave and saying the federal police are making the violence and the protests far worse.