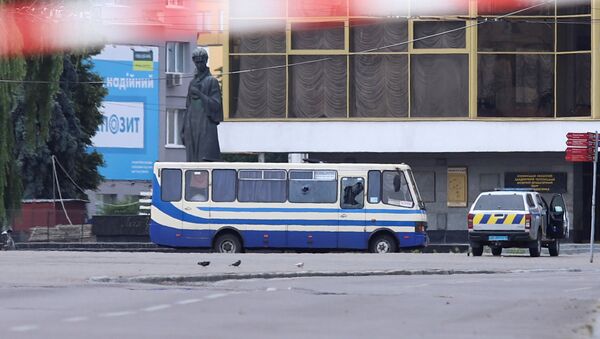 A 44-year-old man Maksim Krivosh hijacked a bus with 20 passengers in the centre of Lutsk on Tuesday morning. After about 12 hours of the hostage crisis, the hijacker eventually released all hostages and was detained by the police.

Blasts were heard at the site of the hostage-taking incident in the Ukrainian city of Lutsk, a correspondent for Ukraine's Channel 24 reported.

Prior to this, Ukrainian Deputy Interior Minister Anton Gerashchenko said in a statement that a man had seized a bus with around 20 hostages, threatening to detonate a bomb on the vehicle and also an explosive at another location. The bus, which has shattered windows, was parked at Teatralnaya Square in downtown Lutsk.

Local police immediately launched a rescue operation and started working to identify the attacker, who introduced himself to law enforcement as Maksim Plokhoy. The armed man told local outlet First Social News Channel via the phone that there were children and pregnant women among the hostages.

The police also launched a criminal case under the "hostage-taking" article of Ukraine's Criminal Code, which provides for a prison term of between 7 and 15 years. However, several hours later, Security Service of Ukraine Chairman Ivan Bakanov said that Ukrainian police are considering the hostage-taking situation in Lutsk a terrorist act.

KIEV (Sputnik) - The National Police of Ukraine will heighten security measures in nine regions across the country in the wake of a terrorist attack in Lutsk, the agency's press service said on Tuesday.

"To ensure the safety of citizens, the management of the National Police of Ukraine decided to strengthen measures to ensure public safety and public order on the territory of Vinnytsia, Zhytomyr, Transcarpathia, Ivano-Frankivsk, Lviv, Rivne, Ternopil, Khmelnytsky and Chernivtsi regions", the police said on Facebook.

Police will also check the documents of all suspicious persons. It is noted that law enforcement officers will pay special attention to suspicious objects where explosive devices can be placed.

"I greet everyone who fought all day for the liberation of people in Lutsk and, in fact, for their lives. We all worried and followed the development of events, worked out plans and changed them, taking into account the situation. Human life is the most important value. We have not lost anyone. Today, relatives and friends can hug everyone who has suffered a day on the bus at gunpoint. There is no place for terrorism in any country", Zelenskyy said on Telegram.

One accomplice of the hostage-taker was detained in Kharkiv, their weapons were seized, according to the Ukrainian Interior Ministry.

"There are no wounded. There are no other explosives that were planted in other places. He [the terrorist] really had a functioning pistol, a functioning machine gun. He really had one combat grenade. Therefore, there was a threat, but everything is in the past", Ukrainian Interior Minister Arsen Avakov told the ZIK broadcaster.

"An infantry fighting vehicle has arrived. What is happening there now in the bus, it is rather difficult to judge how many people managed to get out before the blast happened. The explosion was somewhere outside the bus", the ZIK channel's correspondent said during the broadcast.

The Ukrainian Security Service has classified the attack as an act of terrorism, the ministry's press service reported.

According to Ivan Bakanov, the head of the security service, law enforcement officers are doing everything possible to free the hostages.

"The situation requires coordinated actions of all law enforcement agencies, we are in constant contact. These processes are usually non-public and we will be able to address all inquiries after all the hostages are in complete safety. We are doing everything possible", Bakanov said.

Ukrainian President Volodymyr Zelensky has fulfilled the demand of the man who took hostages in the bus in Lutsk and called on everyone to watch the 2005 movie "Earthlings".

"The 2005 movie 'Earthlings,' everyone should watch it", Zelensky said in a video message posted on his Facebook.

"Earthlings" is a US documentary focusing on the problem of human cruelty toward animals, as well as the harm to livestock and fisheries on a global scale.

"[First Deputy Head of the Ukrainian National Police and Chief of the Criminal Police Yevhen] Koval got out three hostages", Avakov wrote on Twitter.

The man behind the attack said on air the Lviv NTA TV channel that the hostages on the bus were in a bad condition.

One of the hostages called the broadcaster and handed the phone to Krivosh, who told reporters that he would release the hostages when his demands were fulfilled.

"The hostages are in poor condition. The bus is full, one person is injured, there is one pregnant woman, one child", the hijacker said on live TV.

"The first results of the negotiations in Lutsk. Maksim Krivosh [Plokhoy] allowed the police to hand over some water. The deputy national police chief, Yevhen Koval, handed the water over to the hostages", Deputy Interior Minister Anton Gerashchenko wrote on his Facebook page.

Gerashchenko previously said that Plokhoy did not allow law enforcement officers to approach the bus with food and water for the hostages. Plokhoy also tried to shoot down police drones. There are reportedly pregnant women among the hostages.

Ukrainian Interior Minister Arsen Avakov, in turn, refuted some reports that the captor was treated in a mental hospital.

"You spread the information that this man was being treated in a mental hospital, such information is false", Avakov said during a briefing in Lutsk, broadcast by the NewsOne TV channel.

The minister added that the assailant had a smartphone and could see and hear all the comments.

The criminal investigation department of the National Police of Ukraine has previously said on Telegram that the man was a patient at the psychiatric institution.

According to 24 Kanal (Channel 24), three separate explosions may have been heard near the bus where a man has taken 20 people hostage. The incident reportedly occurred at 12:20 p.m. GMT.

"About 20 minutes ago, three blasts were heard. One of them was an explosion and other suspicious pops. The military, when they were next to me, said that it was a sound allegedly from a grenade. A smoke cloud was visible", a correspondent said.

According to the UNN news agency, the hostage-taker threw an unidentified explosive device from the bus. The device then exploded, but nobody was hurt.

According to Ukrainian law enforcement, the perpetrator previously served a prison term for an armed robbery and was being observed by psychiatrists due to mental issues.

"The man said that the bus was mined, he has an automatic weapon and a large number of explosives. In addition, according to him, another explosive device is in a different location and can be detonated remotely", the prosecutor's office said on Telegram.