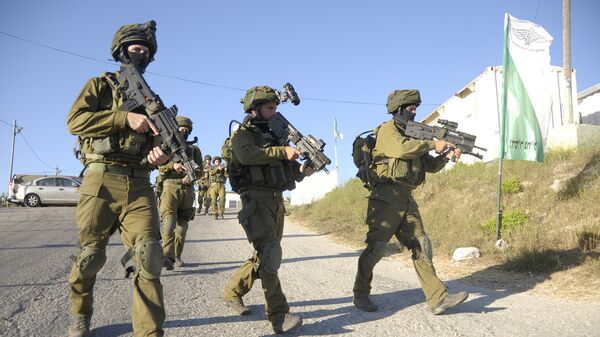 Muhammad Osman
All materialsWrite to the author
The drone was said to have been filming a video clip of a music band, affiliated with Hezbollah, to celebrate the anniversary of the 2006 Israel–Hezbollah War, known in Lebanon as the July War and in Israel as the Second Lebanon War, that started on 12 July 2006 and lasted until 14 August of that year, with both sides claiming victory.

On Sunday, the Israeli Defence Foces claimed they "took action" against what was described as "a drone infiltrating Israeli airspace from Lebanon".
However, according to the Lebanese National News Agency, the drone in question was in fact "hijacked", while it was allegedly filming a Lebanese music band shooting a clip, dedicated to the celebration of the 2006 Israel–Hezbollah War, near the Israel-Lebanon border.

“While the vocalist Hassan Harb and his music band were filming a new song, commemorating the victory in the July 2006 war, in the Panorama area on Udaysa Road, along the border wall between Lebanon and occupied Palestine, amid a crowd of citizens gathering to watch the filming, the enemy Israeli forces on the other side, hijacked the DJI drone, used to photograph the artwork, and pulled it into the occupied territories", the outlet said.

Local journalists reported that the drone continued sending footage even after it was pulled into Israeli territory.

Part of the music video filmed by the drone before its seizure has been posted on social media.

Hezbollah used a drone near the border earlier to film their boy band, which was then intercepted by the IDF according to an Israeli army spokesman pic.twitter.com/7mG3WkGVN0 https://t.co/va17KkHVgg

Earlier in the day, the IDF said Israeli forces "took action against [the drone] with a variety of tools".

"IDF soldiers spotted & monitored a drone infiltrating Israeli airspace from #Lebanon earlier this evening", the IDF said in a statement on Twitter on Sunday. "We will continue to operate to stop any attempt to violate Israeli sovereignty".

We will continue to operate to stop any attempt to violate Israeli sovereignty.

According to local Lebanese media, Hezbollah has issued a warning to the IDF, through the United Nations forces operating in southern Lebanon, saying a drone photographing an artistic endeavour is a civilian and a non-military activity. The organisation reportedly said that Israel should return the drone or pay compensation.