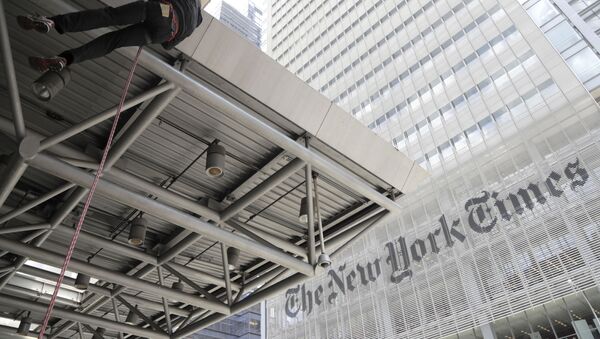 Last month, the author of The New York Times Magazine's Pulitzer-wining project 1619, aimed at re-examining the legacy of slavery in the US, said it was immoral to use the word "violence" when talking about destructive protests against racial discrimination in the country that resulted in buildings being burnt, destroyed, and looted.

The New York Times and its Sunday supplement The New York Times Magazine have criticised the founding fathers of the United States for being slave owners, but don't address the skeletons in their own closet, the New York Post reported. An investigative report, conducted by Michael Goodwin, revealed that Adolph S. Ochs, the owner of the newspaper and his ancestors were supporters of the Confederacy and even owned slaves.

According to Goodwin, Adolph Ochs, who transformed The New York Times into "the gold standard of journalism" after purchasing the paper in 1896 in a bankruptcy sale, donated money for the Stone Mountain memorial in Georgia that depicted Jefferson Davis, the president of the Confederacy during the US Civil War. Moreover on the 100th anniversary of Davis’ birth, NYT published an article where the politician was described as a "great Southern leader".

Another newspaper Adolph Ochs owned, The Chattanooga Times, published an article in 1900 about the Democratic Party, which the Ochs supported, that read:

"[The party ] may justly insist that the evils of negro suffrage were wantonly inflicted on them".

When Adolph Ochs himself suddenly died in 1931 in Chattanooga an association called United Daughters of the Confederacy, where Adolph’s mother was a member, sent a pillow embroidered with the Confederate flag to be placed in the coffin, Goodwin writes citing a 2012 report from the Civil War Times.

One of Adolph’s ancestors Abraham Mendes Seixas was involved in slave trading. In a 2004 book about the slave trade titled "The Final Victims", Goodwin found a commercial advertising the sale of slaves.

"Abraham Seixas . . . He has for sale, Some Negroes, male
Will suit full well grooms,
He has likewise Some of their wives
Can make clean, dirty rooms.
For planting, too, He has a few
To sell, all for cash, . . . or bring them to the lash".

In his article Goodwin laments the fact that The New York Times criticises the founding fathers of the United States and other US presidents, but fails to make mention of the Confederate skeletons in its closet.

"Handcuff the cops, tear down the statues, rewrite the textbooks, make America the world’s bad guy — that’s what today’s Times is selling. Anyone with such an activist agenda better be purer than Caesar’s wife. The Times clearly fails that test and owes its staff, stockholders and readers a full account of the slave holders and Confederates in its past", Michael Goodwin wrote.