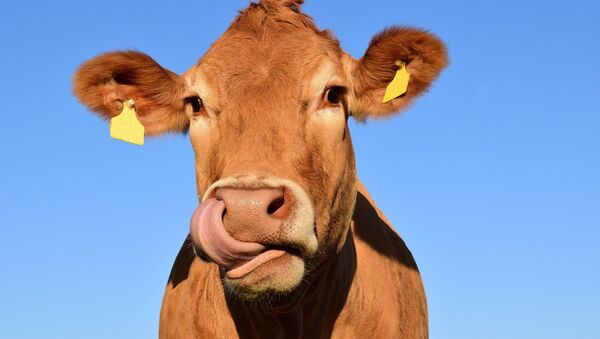 New Delhi (Sputnik): Cow rearing for products like milk and curd is an important economic activity in rural Indian states. India has also been coming up with a myriad of uses for cow dung - recently, the Indian state of Gujarat announced clinical trials of medicine derived from cow products to treat COVID-19.

​The state government has said that it would now purchase the cow dung at less than a dollar per kilogram and focus on making cow rearing an economically profitable activity.

The cow dung will be used to make fertilisers (traditional organic farming) and other products which, the state chief said, will increase villagers' income.

While launching the scheme, the state chief said that this is the first time that a state government has launched such a project and announced the establishment of a Godhan (cow products) Committee and the Self-Help Group that will oversee its implementation.

Agriculture is the backbone of the Indian economy, where livestock plays an important role and comprises nearly 16 percent of the income of small farm households and 14 percent of all rural households.

Meanwhile, cow products such as milk, butter, ghee (clarified butter), dung, and urine, known as "Panchgavya" in the Hindi language, are also being put to use in the pursuit of a cure for the coronavirus. India's Gujarat state has announced that it would hold clinical trials for a medicine made out these five cow products as a part of Ayurveda (a natural form of medicine in India) cure finding.

A Hindu religious group also held a cow urine and dung party, claiming that consuming the products provides immunity against the infection.