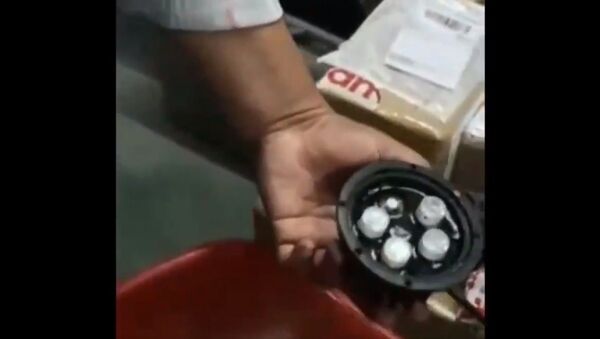 New Delhi (Sputnik): Due to the COVID-19 pandemic, international air travel has been severely restricted for months and this has also affected the business of drug cartels, said an officer of India's nodal drug law enforcement and intelligence agency.

India's Narcotics Control Bureau (NCB) on Monday said it had seized 1.7 kg of "high-grade" heroin while it was being smuggled into the country through international courier services. It has an estimated worth of about $909,000.

A video of it that was shared by the agency shows officials taking out the heroin, which was concealed in LED lights, cosmetics, and soaps.

According to a senior official of the central anti-narcotics agency, four people, including two Nigerians, were arrested for their alleged involvement in the racket.

"Investigation of the accused have revealed that the consignee of these international couriers is stated to be in India's Assam State while the consignor is from Uganda", the officer said.

During the investigation of the accused, it was found that one of the Nigerian nationals had a fake Indian visa in his passport, while the second did not possess any legal document for staying in the country.

The agency has found that drug traffickers are now using international courier services to smuggle contraband across countries. “The drug trafficking racket was being run during the constraints of international air travel”, an NCB officer said.

Before the pandemic hit the world, drug mules were used by smugglers. They used to swallow the drugs and go to India.

In March of this year, Interpol issued an alert to all member nations that organised crime syndicates would be using new methods to smuggle narcotics due to the COVID-19 lockdowns and restrictions on air travel.