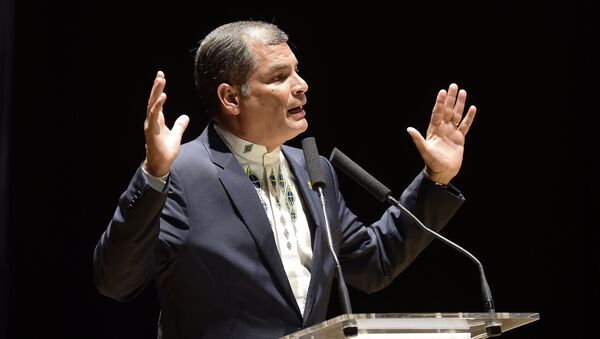 The criminal court said in April that the former president of Ecuador, former Vice President Jorge Glas, and 16 others were found guilty of "aggravated passive bribery". Several others were given reduced terms for cooperating with the authorities.

The court of appeal has issued an 8-year prison sentence for former President Rafael Correa for the alleged crime of bribery in the so-called “Caso Sobornos 2012-2016”. The sentence was also issued for all the accused.

"Although hard to believe, it was to be expected. There can be no more ridiculous ‘case’ and ‘sentence’. They are not going to defeat us, but all the innocent people who are suffering from trying to hurt me", the former president said on Twitter, commenting on the court’s decision.

Correa, who is reportedly living in Belgium, has been banned from politics for 25 years. The 57-year-old has responded to the charges by accusing the government of trying to stop him from running in next year's general elections.

Prosecutors have accused Correa's centre-left political party, Pais Alliance, receiving payments from businesses between 2012 and 2016 in return for lucrative government contracts. According to the investigation, the corruption plot used secret codes, multiple bank accounts, cash transactions, and other methods to conceal the identities of those involved in the affair. In addition, illegal funds intended for electoral activities were not declared to the supervisory watchdog. The amount of damage to the state inflicted by the corruption from 2012-2016 exceeds $7 million, according to Ecuadorian Attorney General Inigo Salvador.