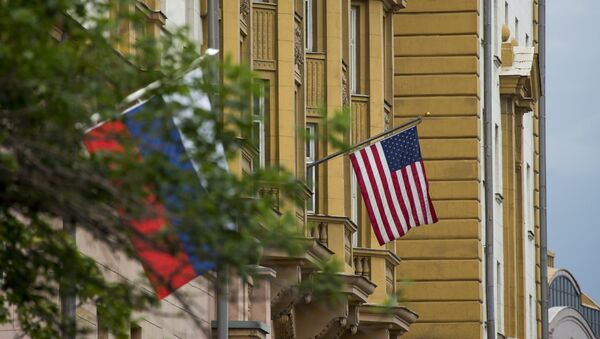 MOSCOW (Sputnik) – The US uncompromising position on the Open Skies Treaty may even further alienate Washington and even its long-standing allies, the experts said, adding that if the US administration continues to abuse the transatlantic bloc to turn Europe against Russia, Europe may lose its patience one day.

This week, nearly two months after US President Donald Trump announced the US withdrawal from the Open Skies Treaty, the US Air Force officially announced that it dropped plans to update and conduct maintenance to the OC-135 Open Skies aircraft and cancelled the programme, making the future of the agreement even vaguer and uncertain.

Signed in 1992, the Treaty on Open Skies was established as trust-building and transparency measures in the post-cold war world. The agreement set a programme for its 35 parties to conduct unarmed aerial surveillance over the territory of the participants to openly collect information about one another's militaries. The Open Skies aircraft should pass specific standards to be allowed to conduct the operations.

Parties to Open Skies Treaty to Convene on Monday to Discuss US Withdrawal
Yet, in May 2020, US President Donald Trump abruptly announced his country was quitting the treaty, claiming long-standing non-compliance by Russia. US Secretary of State Mike Pompeo specified shortly later that Washington would withdraw in six months unless Moscow commits to observing the pact. Russia denied US claims of breaching the pact and said later that Moscow saw no reason to trust Washington's claims.

In early July, the remaining treaty signatories held a conference to discuss the United States' withdrawal from the agreement. Speaking after the conference, Russian Deputy Foreign Minister Sergei Ryabkov said that Moscow and Washington have not succeeded in harmonising their stands on the treaty, and Washington was unlikely to change its decision.

The US decision puzzled its allies, in particular, France, Germany, Belgium, Spain, Finland, Luxembourg, the Netherlands, the Czech Republic and Sweden. The nations condemned Trump’s move to leave the agreement, praising the treaty as "a crucial element of the confidence-building framework" in Europe and across the Atlantic.

Rift Between US, Allies to Continue to Widen

The Open Skies Treaty became the third arms control deal, after the Iranian nuclear agreement and the Intermediate-Range Nuclear Forces (INF) treaty, that Trump has left in the years of his presidency. In both cases, the US moves raised eyebrows among Washington’s partners.

The rift between the US and its allies has been widening since Trump took office, Noah Mayhew, a research associate at the Vienna Center for Disarmament and Non-Proliferation, recalled in an interview.

"If the United States does not reverse its decision to withdraw from Open Skies, I have no doubt that this rift will continue to widen", he said.

As the US rhetoric toward the Open Skies agreement strengthens, speculations emerge that the US allies, which are among the signatories of the deal, may cave in to US pressure and ditch the agreement. Earlier in July, Ryabkov stated that the agreement may fall apart in a domino effect if participant countries succumb to US pressure.

However, Mayhew believes that the parties to the agreement would still continue to benefit from the surveillance flights that remain. He recalled that many of the surveillance planes are American and as a result, there will be few resources to implement the treaty.

"Even still, the Trump Administration’s disdain towards multilateralism has alienated many of US-friendly countries in Europe, so others leaving simply because the US leave does not seem likely", he said.

According to the expert, the real risk is that Moscow would decide to quit the agreement.

"With neither Russia nor the United States in the Treaty, the utility of the Treaty as a confidence-building measure would be drastically reduced and may become little more than a symbolic gesture among remaining countries", he said.

The assertiveness of US foreign policy is getting tougher every day and other countries are simply losing patience with such "a non-constructive approach", Milan Uhrik, a member of the European Parliament, said.

"If the US would permanently abuse the transatlantic alliance to chase Europe against Russia, the Europeans will lose their patience with this approach one day", Uhrik, who is also a member of the delegation to the EU-Russia Parliamentary Cooperation Committee and the delegation for relations with the United States, said.

Yet, Uhrik admitted that such a decision to quit the deal may be changed when US allies from NATO increase the pressure on Washington.

"Uncompromising position of the USA can further damage the disrupted relations between the EU and the USA. If the transatlantic alliance of Europe and the USA would permanently serve as a battering ram of the US against Russia then the Europeans will sooner or later start to evade from this transatlantic alliance and start to build their own defence and foreign policy", he said.

Uhrik noted that the decision to walk away from the treaty was purely political.

"I think the main and real reason of president Trump doing such resolutions is to show the US citizens (and voters) that he is not under Russian influence, that the US are 'strong again' and they won't obey anybody from abroad", Uhrik said.

Small Chances to Re-Join Treaty for US

The chances that Washington would anyhow change its course on the treaty are small as long as Trump remains president, according to Mayhew.

"Since he took office President Trump and his Administration have shown marked contempt for multilateralism seemingly in any form – the JCPOA [Joint Comprehensive Plan of Action, also known as Iranian nuclear deal], the INF Treaty, Open Skies, New START [Strategic Arms Reduction Treaty] and even the Paris Climate Accords and the World Health Organisation", he said.

Mayhew believes that if Trump is defeated at the November presidential election, the new leader may attempt to "repair some of the damage", including the resumption of Open Skies talks.

"But a new US president would take office in January 2021, several months after the US is no longer party to Open Skies. As a result, it would not simply be a matter of reversing the decision to withdraw, but rather acceding to the Treaty all over again – somewhat more complicated", he concluded.

Meanwhile, Democratic presidential nominee Joe Biden has already voiced his support for the treaty and said that if elected, he could reverse plans to pull out of the deal.

Asked about the future of the deal, Mayhew believes that the deal does not have to cease functioning without Washington.

"Whether Open Skies goes away completely or not is up to the countries that remain, should the US indeed withdraw", he explained.

He recalled that the Joint Comprehensive Plan of Action, also known as Iranian nuclear deal, keeps functioning – yet, with more difficulties - even after the withdrawal of the US back in 2018.