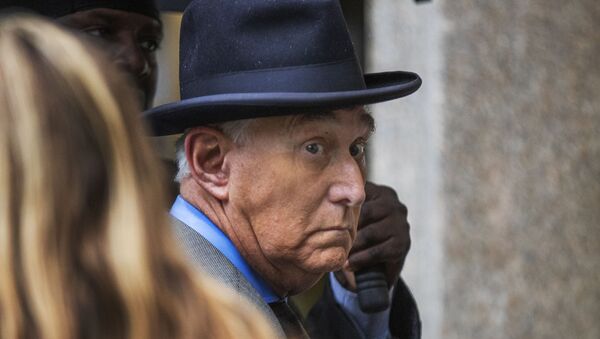 Tim Korso
All materials
The former campaign aide to President Donald Trump was spared from a prison term after the POTUS commuted his sentence for seven counts of witness tampering and giving false testimony. Trump argued that Stone was wrongly accused in a made-up, politicised case.

Shortly after being relieved of the prospect of being thrown behind bars for the next three years, Trump’s former adviser Roger Stone has landed in hot water once again. This time, however, it’s not witness tampering that he’s being accused of, but rather of using a term from the last century that has since become a racial slur on air, purportedly directed at Morris O’Kelly, the African-American radio host interviewing him.

The two were discussing Stone’s conviction on charges of witness tampering and perjury, as well as the alleged role that his friendship with the US president played in receiving clemency from the POTUS. But while O’Kelly was making his point that Stone might have benefitted from his close ties to the president, Trump’s former aide seemed to cut him off for a moment and was apparently heard murmuring an only partially distinguishable phrase.

"I can't believe I'm arguing with this N*gro", was the phrase that O’Kelly claims he heard Stone murmuring, while some netizens allege that the first part of the phrase was "I don’t feel like arguing with …"

O’Kelly, who apparently could not believe his ears, tried to ask Stone why he addressed him that way, but the former aide said he could barely hear the host and later strongly denied using a racial slur, telling O’Kelly "you're out of your mind". In a written comment on the incident for the Daily News media outlet, Stone alleged that O’Kelly's studio engineer said those words while cutting his audio feed.

The host, however, didn't buy Stone's explanation, stating afterwards that he "heard what [he] heard" and following up with "I am nobody's N*GRO". Despite that, O’Kelly continued to interview Stone without raising the issue again.

"He didn’t see me as a journalist, not as a professional, not a radio host […] but a ‘N*gro’ first and foremost. […] Thirty years as an entertainment professional, twenty of them in radio. ‘N*gro’ was the first pejorative uttered. The low-calorie version of the N-Word", O’Kelly said in a blog post after the interview.

The alleged gaffe didn't pass by the netizens unnoticed, many of whom confirmed hearing the same racial slur as O’Kelly did, harshly condemning Stone's behaviour, while praising the host's professionalism and ability to carry on with the interview regardless.

I love you @MrMokelly and you handled one of the most disgusting, vile & dehumanizing on air incidents I have EVER heard in my life with dignity & class. @KFIAM640 is lucky to have you and you have always been one of the greatest radio talents there is. I am nonetheless OUTRAGED.

You heard it exactly right MoKelly, because I heard when he said the very first time LOUD & CLEAR. I commend you for being the true Professional and Gentleman that you are and maintaining your composure and professionalism in the manner you did.

Numerous twitterians said they were not surprised by Stone's alleged racial remark, which he denied uttering, while others went even further, suggesting that it was only logical to expect something like that from a former member of Donald Trump's team, alleging that the president and his aide are just two sides of one coin.

Why is anyone surprised?

And then he said you’re out of your mind...he is definitely from the Trump camp of deny, lie and deny some more.

I heard it too the I ❤ radio app
Way to go and let him off the hot seat
This is Trumps buddy if Stone talks like this what are the chances that Trumps talks like this hmmmm?

Many social media users couldn't avoid noticing the poor timing of Stone's alleged gaffe as he had just been granted presidential clemency and then wound up in the middle of another scandal.

Well, he may have got out of jail but now he will be in a different jail, we call it hell. Its waiting for him. Bad people go there, its an old saying that no one seems to believe in. But Kelly have just opened that door. He is a fool.
Really sorry Mo, that he called you that.

Didn’t take him long to do something stupid.

There were those, however, who stood by the political strategist. Some of them blamed O’Kelly for bringing this on himself with his attacks and allegations against Stone, while others suggested that the host was trying to win some PR points by utilising the scandal.

It was an insulting and incendiary comment on your part. You're an asshole.

I’m starting to believe it may be Moe’s as well... scratch my back and I’ll scratch yours. Radio gold that will do nothing to harm Roger’s reputation and will give Moe’s show a boost.

A multitude of netizens challenged the notion of Roger Stone being a racist just because he may have used the word "n*gro". They noted that the word was used as a normal term when referring to African-Americans in the 20th century and that some organisations use it in their names even today.

The people tweeting under "Roger Stone Uses Racial Slur" should probably condemn the United Negro College Fund and the National Association for the Advancement of Colored People, just to be safe. pic.twitter.com/9cMkVrtCq4

Negro is the proper term for ur race as in ...... pic.twitter.com/IEir4qcVaM

Others went even further by suggesting that the term should not be considered a racial slur and called for it to be legitimised again.

To all my white friends, you are hereby given permission to use the term "Negro" without fear of being denounced by me. "Roger Stone Uses Racial Slur"