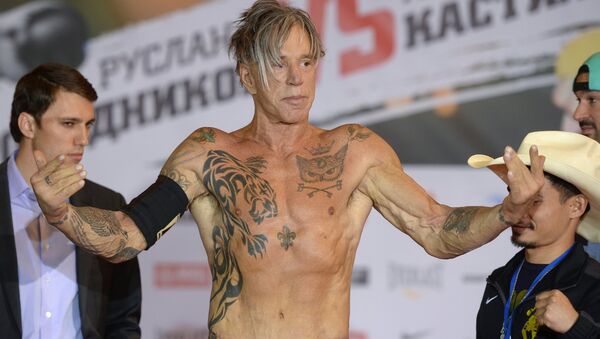 The threat follows a claim made by Rourke in September, when he alleged that Martin Scorsese wanted to cast him in his gangster epic The Irishman, but De Niro refused to work with Rourke in the movie.

Social media users were left baffled after Mickey Rourke attacked Robert De Niro in an Instagram post, threatening to "severely" embarrass his 76-year-old fellow actor next time he meets him. The Oscar nominee claimed that his agent had learned about De Niro calling Rourke a liar.

"Hey Robert De Niro, that’s right i am talking to you, you big f**king crybaby. A friend of mine just recently told me that a few months back you’re quoted as saying to newspapers 'Mickey Rourke’s a liar he talks all kind of sh**t'. Listen Mr.Tough Guy in the movies, you’re the 1st person that ever called me a liar and it was in a newspaper. Let me tell you something, you punk a**, when i see you i swear to God on my Grandmother, on my brother and all my dogs,i gonna embarrass you severely 100%. Mickey Rourke 'as God is my witness'", the actor wrote in a statement on his social media.

The post, which has received 15,000 likes, polarised social media users, with many siding with Mickey Rourke

​While the other side backed Robert De Niro.

Bit distasteful seeing a ageing actor with awful cosmetic surgery pointing the finger at another elderly actor ! Grow up

​Some netizens even started betting on a potential fight and imagined De Niro’s reaction.

10$ on Mickey, Robert just older and that's it

​Many Twitter users couldn’t figure out what the altercation was all about.

Trying to figure out what provoked this pic.twitter.com/gtMbZG8Lrr

​Some users contended that the two actors are trying to promote their new films.

Both have new films to promote. Mr O'Rourke would appear to need a little more publicity.

​Others noted that Rourke still can’t get over a 1987 dispute when he starred alongside De Niro in the thriller Angel Heart.

​Back then, the rift reportedly started after De Niro snubbed Rourke when he wanted to introduce himself on the set. "I think it’s better if we don’t talk because of characters in the movie. It’s better if we don’t say hello, talk or anything", Rourke cited De Niro. The actor said that De Niro’s behaviour hurt his feelings.

In September, Rourke claimed that he was booted from Martin Scorsese’s The Irishman after De Niro allegedly refused to work with him. The film’s casting director and producers said Rourke was never asked to be in the film.