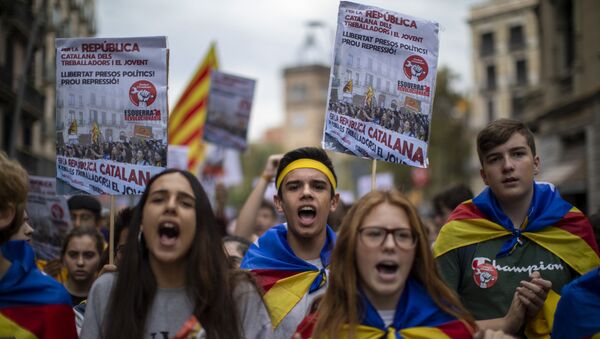 © AP Photo / Emilio Morenatti
Subscribe
The denial comes after an investigation determined the mobile devices of at least five members of the regional independence movement were targeted using software its makers claim is sold only to governments. The firm in question, NSO Group, developed the notorious Pegasus spyware believed to have been used in the operation.

Spainish government has denied any involvement in the use of spyware to target senior members of the Catalan independence movement, claiming “this government doesn’t spy on anyone”.

​The shock revelations have prompted calls for a parliamentary investigation and two of the alleged victims have already made clear they intend to take legal action against Felix Sanz Roldan, who was head of Spain’s National Intelligence Centre (CNI) at the time of the targeting in April and May 2019.

Spain’s interior ministry has stated the actions of country's security forces are always conducted “with the utmost respect for the law” – and in an interview 19th July, Carmen Calvo, senior deputy prime minister, said the government was “absolutely not” involved.

She added the legal action against Roldan was proof of the legal recourse available to Spanish citizens should they feel the state has infringed their rights.

Her comments came as Catalan vice-president Pere Aragones said “espionage is also a form of repression”, adding he couldn’t understand why public prosecutors were not already investigating the matter.

“What I ask myself is how it is it possible public prosecutors haven’t opened a legal investigation. It this was the other way round, I’m sure they would have,” said Aragones.

The regional vice-president also said he hasn’t yet been contacted by the central government to explain what it knew – or didn’t know – about the targeting.

The allegations came ahead of possible Catalan elections this autumn, and as the government prepares to bring its 2021 budget before parliament – an already high-tension time given ongoing issues around the future of the autonomous community.