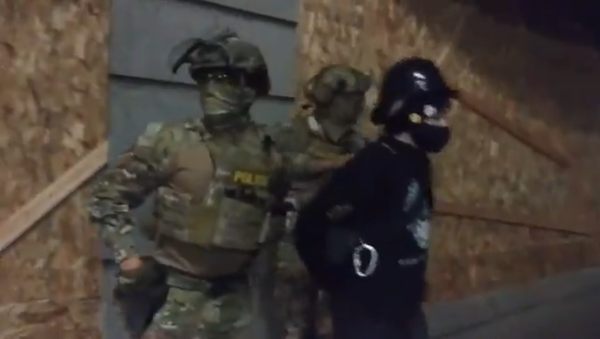 Tim Korso
All materials
The anti-racism protests in Portland began following the death of George Floyd and have at times turned violent, with rioters recently breaking into a police union building and setting it on fire.

Portland's Democratic Mayor Ted Wheeler has condemned the presence of federal officers from the Department of Homeland Security in the city as "completely unconstitutional" and a "threat to our democracy". Wheeler went on to allege that their presence has in no way helped to ease the anti-racism protests in Portland and argued that it has even exacerbated the scale of them, demanding that President Trump withdraw the federal officers.

"What they are doing is sharply escalating the situation. Their presence here is actually leading to more violence and more vandalism. And it's not helping the situation at all. They're not wanted here. In fact, we want them to leave", Wheeler said.

Federal police were deployed after local law enforcement failed to curb the unrest after over a month of demonstrations that often escalated to clashes with law enforcement. The federal government has defended the move to deploy officers to Portland, with Homeland Security Secretary Chad Wolf saying that "lawless anarchists" have been destroying property, including federal, and attacking police officers every night.

US President Donald Trump, in turn, opposed Wheeler's criticism, insisting that the federal government intervened in the situation only in order to protect federal property and Portland's residents, not to "hurt" the city.

We are trying to help Portland, not hurt it. Their leadership has, for months, lost control of the anarchists and agitators. They are missing in action. We must protect Federal property, AND OUR PEOPLE. These were not merely protesters, these are the real deal!

The riots in Portland are a part of a broader protest movement against racism and police brutality, which has engulfed the US since the end of May. The demonstrations started in response to a police officer killing African-American man George Floyd during an arrest.

However, what started as a movement calling for police to respect the lives of racial minorities transformed into demands to defund law enforcement, with the protests at times turning into riots accompanied by looting, as well as the desecration and destruction of historical monuments linked to slavery and racism.