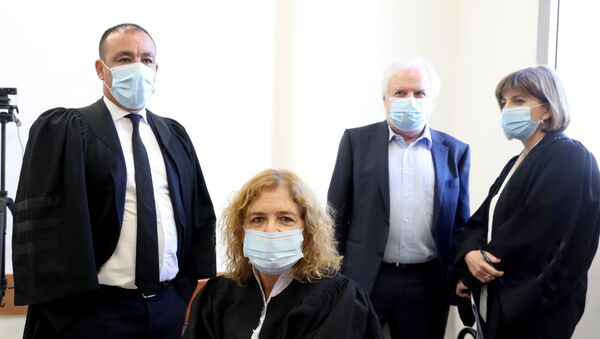 © REUTERS / Marc Israel/Pool
Subscribe
Israeli Prime Minister Netanyahu has been the subject of multiple corruption investigations, including over claims he received expensive gifts from various businessmen, advanced a law that would benefit one of Israel's major newspapers, and supported looser regulation of telecommunication company Bezeq in return for positive coverage.

Judge Rivkah Friedman Feldman on Sunday announced that Prime Minister Benjamin Netanyahu's criminal trial for bribery and breach of public trust will begin in January 2021 with witnesses to be called three times a week.

The hearing focused on the additional time to be given to Netanyahu’s lawyers to study the investigative material related to the case.

During the hearing that kicked off earlier on Sunday, one of Netanyahu's lawyers, Yossi Segev, said that "it will be hard for me to face a masked witness and see if he’s telling the truth".

The first hearing was held in May and the parties agreed that Netanyahu’s lawyers would be given two months, after which the court would move to discuss the timeline of the trial.

Prior to the hearing, Netanyahu lambasted the process as an "attempt to depose a strong right-wing leader" and topple him "in any way possible”.

What's It All About?

Several cases have been opened so far against Netanyahu, who has been Israel's prime minister since 2009.

Under case 1000 Netanyahu is accused of fraud and breach of trust over allegations of receiving valuable gifts, such as cigars and champagne, worth some $180,000 from billionaires between 2007 and 2016, allegedly in exchange for political favours.

Case 2000 suggests the prime minister struck a deal with the editor of one of the country's biggest newspapers, Yedioth Ahronoth, to tone down its criticism of Netanyahu in 2014, promising to boost the newspaper's positions in the country in exchange.

Unsinkable? Left-Wing Circles Rush to Bury Netanyahu Who Grew Stronger Despite Trial - Ex-Politician
Case 4000, in turn, accuses the prime minister of bribery, fraud, and breach of trust for using his post as communications minister between 2012 and 2017 to strike a quid-pro-quo deal with a controlling shareholder of Bezeq - the country's telecom giant.

Prosecutors believe that shareholder Shaul Elovitch provided improved coverage of the prime minister in the media controlled by Bezeq in exchange for favours from Netanyahu.