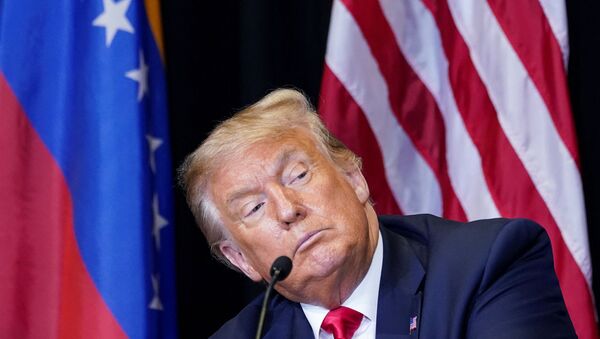 Tim Korso
All materials
The US president often questions the mental capability of his opponents, including Dem US presidential candidate Joe Biden, referring to numerous public gaffes by the former vice-president. Trump earlier tweeted that his opponent be given a cognitive test, and boasted of his own outstanding results, should one be administered.

US President Donald Trump again mocked Joe Biden, his likely opponent in the upcoming November election, suggesting that the Democrat will not be able to survive "tough" interviews like the one POTUS earlier faced with Chris Wallace, a Fox News anchor News known for being favourable toward the president.

"Let Biden sit through an interview like this, he’ll be on the ground crying for mommy. He’ll say, 'Mommy, mommy, please take me home", Trump said, pointedly ridiculing his likely opponent in the upcoming election.

Trump boasted that he is not afraid of interviews with tough anchors, who "hate [his] guts" arguing that he will be able to give "a proper answer to" any question. POTUS mocked Biden's avoidance of personal attendance to publicly attended campaign events in the middle of a surging COVID-19 pandemic, calling on him to "come out of his basement".

In his tirade, Trump harped on a favourite topic, questioning Biden's mental capabilities, but did not claim that his likely Democratic opponent was senile. Instead, POTUS stated that Biden is unfit to be a US president – an allegation often used against Trump by opponents from the Democratic party and former advisers.

"I don't want to say that. I'd say he's not competent to be president. To be president, you have to be sharp and tough and so many other things. He doesn't even come out of his basement", Trump said.

This is not the first time Trump has derided Biden and his ability to serve as an American president. POTUS has tweeted doubt of the former vice-president's ability to pass a cognitive test, a psychological evaluation that Trump boasts to have recently "aced". On a separate occasion, while pressed during an interview for Full Measure News to pinpoint positive traits that Biden might have as a president, Trump struggled to name one, suggesting instead that the former vice-president cannot remember what he did the previous day.