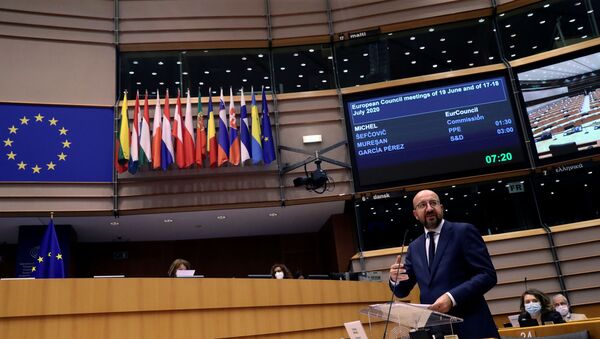 BRUSSELS (Sputnik) - EU talks on an economic recovery plan aimed at alleviating the effects of the coronavirus pandemic will continue on Sunday, Barend Leyts, a spokesman for the European Council President, said.

Occurring on Friday and Saturday, the first in-person summit since the onset of the pandemic is aimed to see opposing economic realities of EU nations attempt to divvy up a 1.07 trillion euro ($1.2 trillion) budget for the coming seven years. To counter the economic fallout of the coronavirus pandemic, the European Commission in late May suggested setting up a 750-billion-euro ($854 billion) recovery fund, which would include 500 billion euros in grants and 250 billion euros in loans for EU nations.

As the second day of the summit has not brought any decisions on the issues under discussion, Barend Leyts, a spokesman for the European Council president, announced the extension of the meeting.

"EUCO [European Council] plenary has now ended. @eucopresident will reconvene meeting tomorrow at noon," Leyts wrote on Twitter late on Saturday, as the second day of talks was over.

Italian Prime Minister Giuseppe Conte said earlier on Saturday that the talks were "more difficult than expected" and that the 27 European Union leaders had found themselves at an impasse, unable to resolve "many issues."

"There are many parties to the discussion, and this makes the process very difficult. There are many questions at stake for which we are looking common positions. These tools should be proportionate to what we are experiencing. No one should approve ineffective means, a firm and reliable collective response is needed," Conte said in a video posted on Facebook.

Speaking to reporters after the Saturday talks ended, Conte said that EU leaders must end the negotiations on Sunday, as it would not be beneficial to prolong the discussion. Conte explained that the talks were difficult because the budget plan and the recovery fund were interlinked and compromise was needed.

Europe remains divided on its adjusted 1.07-trillion-euro long-term budget and recovery fund. The so-called Frugal Four group of European countries — Austria, Denmark, the Netherlands, and Sweden — oppose debt mutualization and believe that money should be issued in the form of loans rather than grants. France and Germany back the stimulus package.