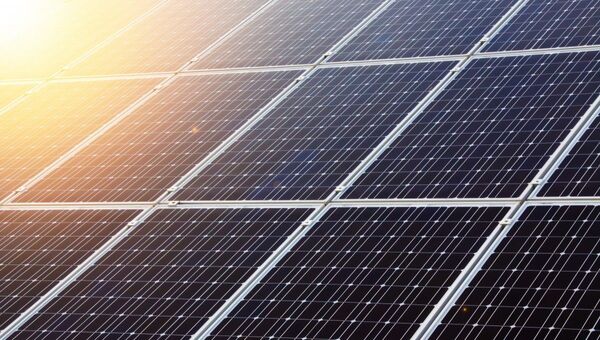 Nair N.B.
Sputnik correspondent
All materialsWrite to the author
New Delhi (Sputnik): India, like other countries, has been adversely affected by the increasing intensity and frequency of extreme weather events attributed to environmental degradation and rising greenhouse gas (GHG) emissions. New Delhi pledged at the UN Climate Change Conference in Paris in 2015 to promote renewable energy.

India set a very ambitious target for promoting renewable energy and reducing its consumption of fossil fuels to help the country pursue a low carbon development path. New Delhi outlined its post-2020 climate actions by setting a goal of 175 gigawatts (GW) of renewable power capacity by 2022, and by 2030 to increase its share of non-fossil-based installed electric capacity to 40 percent. The target for solar energy in India’s 2022 goal was 100 GW.

As of December 2019, the country could generate only 85.90 GW of renewable power, out of which solar power was only 37.5 GW, according to the federal New and Renewable Energy Ministry’s Annual Report for 2019-20. According to the report, solar power generation grew by 14 times over the last five years, i.e., since the nationalist Bharatiya Janata Party came to power in 2014. If India is to adhere to its goal for solar energy by 2022, it needs to add another 62.5 GW to the currently installed capacity. This appears to be too ambitious for India in the present circumstances.

While India set a goal for solar power generation, not much attention was paid to manufacturing capacity in the country. It has depended mostly on cheap imports from China. According to federal Minister for New and Renewable Energy R.K. Singh, the total value of imports of solar photovoltaic cells was US $1,525.8 million between April-December 2019, out of which imports from China alone made up US $1,179.89.

The global outbreak of the coronavirus that has been ongoing since January 2020 and the disruption to trade has brought imports almost to a standstill. Coupled with this, the recent standoff between the armies of India and China in eastern Ladakh has created a wedge between the Asian powerhouses. Prime Minister Narendra Modi has, although not directly, hinted at halting Chinese imports by giving a call for "Vocal for Local", which means promoting "Made in India" products.

There are only about 20 manufacturers of solar modules in India, out of which only seven or eight have the capacity to produce modules of 100 MW or above.  According to industry experts, a 100 MW cell manufacturing facility requires an investment of at least US $10.5 million, excluding land and infrastructure costs. But it would not have the same economies to scale to compete with the imported cell prices.

Any solar cell manufacturing facility, to be economically viable, should have an optimum capacity of 500 MW, which requires an investment of almost US $53 million. Even if the manufacturers scale up their capacity or come up with fresh investments, there is no guarantee of demand, as government procurement goes by the "lowest price" policy.

“An everlasting challenge (for Indian manufacturers) is access to cheap capital. Interest rates in India are very high, which makes it difficult for our manufactures to compete with global players, who have access to affordable capital”, said Pranav R. Mehta, chairman, National Solar Energy Federation of India (NSEFI), an umbrella organisation representing stakeholders in solar energy in the country.

Mehta reiterated a longstanding demand of the NSEFI to provide interest subvention, which would go a long way to helping the manufacturing sector in India. He said that a favourable climate has been created by the government, which could give a spurt in demand, but it has to be matched with favourable policy initiatives.

“This will be really a good opportunity for manufactures to scale up their production. However, in order to produce cost-effective cells, the government should also streamline policies and extend benefits for the manufacturers”, said the NSEFI chief.

Another drawback for Indian manufactures is upgrading technology almost every year, which again is capital intensive. Unlike China, India does not incentivise next-generation technology for higher efficiency solar cells.

“The move at imposing BCD (Basic Custom Duty) on imports will also lead to a rejuvenated push to companies, who are looking to manufacture in India. India should also look at high efficiency solar cell technologies, where it has a chance to become global leader”, suggested Mehta.

The NSEFI has cited taxation under the Goods and Services Tax (GST) regime as one of the biggest concerns of the industry. The federation said that even the parliamentary panel on energy in its recent report emphasised on the need to immediately address the ambiguity and disputes related to GST.

Mehta, who was the first Indian to head the Washington-based Global Solar Council, was confident that India could achieve the current goal of 100 GW by 2020. He said that besides the installed capacity of 37 GW, another 35 GW capacity is under various stages of implementation. The rest could be achieved with several hybrid and ultra mega solar parks under planning, a push for rooftop solar power generation, and the federal scheme for the installation of solar pumps for farmers.

The industry body however, refused to comment on how the short-term demand for solar cells could be met following a disruption of imports from China, or the alternative sources of suppliers outside the country.

Although industry sources said a disruption of imports from China or any other country would have a serious impact on the implementation of the ongoing projects until the current situation in the country unlocks completely. They said that Indian manufacturers could ramp up their full production capacity only after the situation returns to normal.

The NSEFI has made short-term and long-term suggestions to the federal government to bring the solar power-generating sector in sync with the national goals at the same time as taking on global competitions.