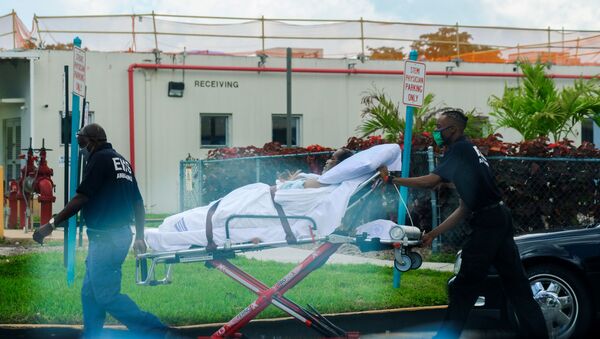 Muhammad Osman
All materialsWrite to the author
The parties, reportedly held and attended by “unsavory” residents, including gang members, are said to have taken place in Florida’s Osceola County. The allegation comes as a majority of US states, including Florida, witness a record resurgence of infections of the COVID-19 coronavirus.

The Osceola County sheriff's office has received over 600 noise complaints over the past months regarding so-called 'COVID-19 Parties' that usually take place at vacation rental homes with the aim of spreading the virus among attendees, Sherriff Russ Gibson revealed to local TV news channel Click Orlando, an affiliate of CBS.

The sheriff asserted that his offices have received complaints about the parties, reportedly attended by “unsavory” residents, since March, and vowed to take action regarding the gatherings which are believed to be contributing to the COVID-19 spike in the county.

“They’re being referred to, from what I’m being told, as COVID-19 parties, where they’re actually getting together and they’re trying to mingle to potentially spread the virus amongst each other if they’re asymptomatic or whatever the case might be,” Gibson said on Friday.

According to the TV station, the number of attendees at the so-called COVID-19 parties range from 50 to 400 people. The gatherings are said to sporadically end in violence and are dispersed by sheriff's deputies when discovered.

Helicopter footage from a purported COVID-19 party, held in May, features dozens of vehicles blocking the road of a residential community while attendees dance in the middle of an intersection.

“Last week someone, some folks in the crowd, threw some fireworks at the deputies that were there. They did the right thing, they backed out, they waited for extra resources to arrive and then we went in and took care of the party,” the sherriff said. “We dispersed it.”

Gibson said that a gun was recovered at that same COVID-19 party and that shootings had taken place as well. The sheriff claimed that the parties are attended by gang members who rent multiple nearby vacation rental properties, specifically in three gated housing developments, to use them for the gatherings amid the COVID-19 pandemic.

“Well, a lot of times, we’ve been finding out that there are people here that are unsavory people that you wouldn’t want in your neighborhoods. There are some gangs, that are renting these houses, and they’re coming here to Osceola County. And this is something that we have to protect our residents with,” Gibson said.

He suggested that some attendees come from other parts of central Florida.

Gibson stated that the gatherings would not only affect those people attending, but it would also endanger the lives of older members of their families in the following days or weeks.

“The problem is when you have this and you take it back home to a parent or grandparent, and unknowingly pass that virus on to them, and potentially end their life -- It’s just not worth it. And you have to think beyond the moment. And I think sometimes our young folks are just thinking about the moment,” Gibson said.

As of Saturday, coronavirus infections in Florida had topped 327,000, including 11,466 cases registered over the past 24 hours alone. The death toll in the state has reached a minimum of 4,894.

The overall number of COVID-19 cases in the US has topped 3.68 million, with a record daily increase of over 75,000 cases. The death toll jumped by 936 on Saturday, pushing the tally to 139,661, according to The New York Times.

000000
Popular comments
Not relevant. US politics are insane.

Barros
19 July 2020, 01:23 GMT
000000
They do not need to PARTY about this, the disease sterilize them so they have no SIGN of their GENE in human history. -----------------Please search ITALIAN and INDIAN findings about this disease which they claim it can be cured by antibiotics, they also have claimed it is not VIRUS but it is BACTERIA. that is the reason you can cure it with antibiotics.
Chamroosh
19 July 2020, 02:53 GMT1
000000
Newsfeed
0
New firstOld first
loader
LIVE
Заголовок открываемого материала
Access to the chat has been blocked for violating the rules . You will be able to participate again through:∞. If you do not agree with the blocking, please use the feedback form
The discussion is closed. You can participate in the discussion within 24 hours after the publication of the article.
To participate in the discussion
log in or register
loader
Chats
Заголовок открываемого материала
Worldwide
InternationalEnglishEnglishMundoEspañolSpanish
Europe
DeutschlandDeutschGermanFranceFrançaisFrenchΕλλάδαΕλληνικάGreekItaliaItalianoItalianČeská republikaČeštinaCzechPolskaPolskiPolishСрбиjаСрпскиSerbianLatvijaLatviešuLatvianLietuvaLietuviųLithuanianMoldovaMoldoveneascăMoldavianБеларусьБеларускiBelarusian
Transcaucasia
ԱրմենիաՀայերենArmenianАҧсныАҧсышәалаAbkhazХуссар ИрыстонИронауОssetianსაქართველოქართულიGeorgianAzərbaycanАzərbaycancaAzerbaijani
Middle East
Sputnik عربيArabicArabicTürkiyeTürkçeTurkishSputnik ایرانPersianPersianSputnik افغانستانDariDari
Central Asia
ҚазақстанҚазақ тіліKazakhКыргызстанКыргызчаKyrgyzOʻzbekistonЎзбекчаUzbekТоҷикистонТоҷикӣTajik
East & Southeast Asia
Việt NamTiếng ViệtVietnamese日本日本語Japanese中国中文Chinese
South America
BrasilPortuguêsPortuguese
NewsfeedBreaking
22:14 GMTTurkey's Third Finance Minister Resigns Amid Plunging Lira Value
21:37 GMTDPRK’s New Nukes & Missiles Force US, South Korea to Rethink War Plans - Report
21:29 GMTAlec Baldwin Claims He ‘Didn’t Pull the Trigger’ in Tragic Death on Set of ‘Rust’
21:10 GMTUS Stocks Drop Nearly 500 Points After Omicron Case Emerges in California
19:40 GMTWomen's Tennis Association Suspends Tournaments in China Due to Situation With Peng Shuai
19:27 GMTSuspected Michigan School Shooter Charged With Terrorism, Four Counts of Murder
19:21 GMTAmerican Author Alice Sebold Apologises to Man Cleared of Her Rape After Spending 16 Years in Jail
19:15 GMTControversy Over Messi's Ballon d'Or Win Escalates as Ronaldo Backs Claims That PSG Ace Stole Award
19:13 GMTVideo: Russian Scientists Unveil Biomedicine Application for Shape-Memory Alloy
19:06 GMTMacron Calls BoJo 'Clown' With 'Attitude of Good-For-Nothing', French Media Claims
18:59 GMT'UFO Cloaked Inside Cloud' Spotted Above Florida, Blogger Claims
18:48 GMT'Sending a Message': Space Force General Claims US Satellites Are Attacked on Daily Basis
18:47 GMTCalifornia Health Officials Identify First Case of Omicron Covid Variant in United States
18:33 GMTRepublicans Fear 'Civil War' in Wake of Ilhan Omar Scandal, Voice Concerns About 2022 Midterms
18:05 GMTDeath Toll From Michigan High School Shooting Rises to 4
17:05 GMTWhat Pushed Donald Trump to View US Intelligence Community With Suspicion During His Tenure
16:42 GMT'Melding of Services': Australia Won’t Lose ‘Sovereignty’ Under AUKUS, says Biden’s 'Asia Tsar'
16:42 GMTIndia's Top Car-maker Maruti Suzuki's November Sales Down 9% On Chip Shortage
16:23 GMTMassive 'Potentially Hazardous' Asteroid 'Taller Than Chrysler Building' To Approach Earth Next Week
15:38 GMTUK Parliament Reportedly on Lockdown After Man Cycles Through Security Gates - Photos